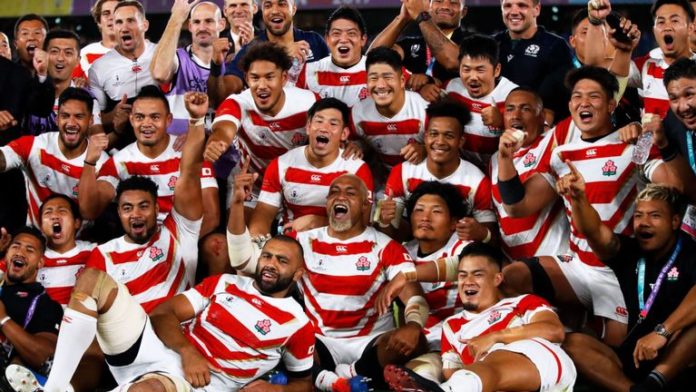 Greig Laidlaw says he has a decision to make over whether to prolong his Scotland career after his final World Cup ended in defeat against Japan.

The scrum-half, who captained his side in the 28-21 loss against the hosts in Yokohama, won his 76th cap but was unable to prevent Scotland suffering just their second exit at the pool stage.

Laidlaw, 34, made his debut for his country in 2011 but will now weigh up whether to call time on his international future for good.

“I’ll go away and have a think. Tonight it’s about staying together as a group,” said Laidlaw, who plays his club rugby for Clermont Auvergne in France.

“Tonight is not about me. I’ll go away and talk to the people I need to talk to and make my decision from there.”

Scotland had won their previous seven meetings against Japan but the Brave Blossoms went into the game ranked above Gregor Townsend’s team.

Laidlaw, who kicked two conversions in the defeat to become the third Scot to score 100 World Cup points, did not dispute they had been second best at the International Stadium.

“We knew Japan have really improved as a team since four years ago,” he said.

“We have to give them credit for the way they have progressed and the way we have performed this evening. We gave away two soft tries and we left ourselves with a mountain to climb.

“They didn’t catch us off guard, we actually started the game pretty well. We got into a lead, we never switched off, but we let Japan into the game.”

Meanwhile, Stuart Hogg conceded he was “hurt” by the Scots’ early exit and said it will “eat away” for a long time.

The full-back, who will now join up with new club Exeter, also spoke of his determination to improve as a player after struggling to make the desired impact for Townsend’s side in Japan.

“This has given me the kick up the backside that I probably needed to get better, to learn, to improve, to want to get better, and I can guarantee that every single player in that Scotland dressing room is the same.

“It’s a long old time until we come back together for the Six Nations in February but now it’s a time to reflect and realise that things won’t go our way all the time.

“If we were at our best we wouldn’t be going home, it’s as simple as that.

“We can’t make error upon error and expect to win Test matches. Those are the hard facts and the hard truths. If we don’t get better we’ll end up in the same situation.

“But I truly believe we have the coaches and players to improve and be in a better place.”