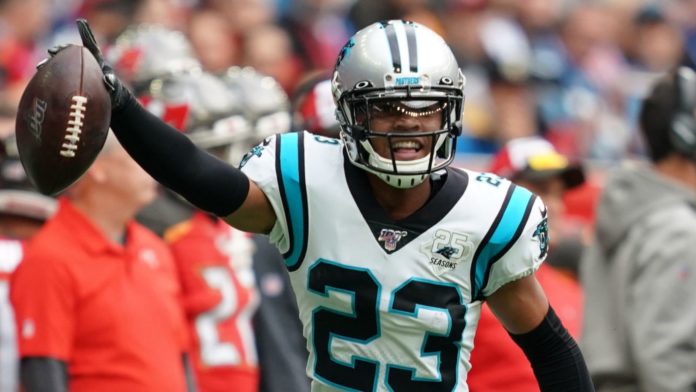 On a desperately bad day for the Bucs (2-4), the play of Jameis Winston was particularly concerning, with the fifth-year quarterback intercepted five times and turning the ball over on six separate occasions. The poor play of his makeshift offensive line didn’t help, with Winston harassed to the tune of seven sacks.

The Panthers (4-2) turned Tampa Bay’s seven total turnovers into 20 points, with early-season MVP candidate, Christian McCaffrey, running in one of those scores in his two-TD day.

McCaffrey’s second, a 25-yard catch and run in the second quarter, was a thing of beauty, as he lined up left but juked back inside to leave a flat-footed Vernon Hargreaves on the floor to pave the way for an easy touchdown.

That bit of McCaffrey brilliance helped Carolina edge out into a 17-7 lead at the half, after Tampa Bay had fought back to within three following a Ronald Jones five-yard touchdown run.

The Panthers streaked further out in front, 34-10 early in the fourth quarter, with two Curtis Samuel TDs either side of a Matt Gay 54-yard field goal for Tampa Bay.

Samuel’s first eight-yard rushing score came off the back of Winston’s third errant throw of the day, while his second was a superb contested catch to open the fourth quarter.

The Bucs finally stopped shooting themselves in the foot on offense – with the exception of a Bobo Wilson muffed punt return to fifth turnover – to run in two TDs (and two successful two-point conversions), good for 16 points.

But, with the Bucs still down 11 with just over two minutes to play, Winston threw his fourth and fifth interceptions to end any hopes of a stunning comeback.

Winston’s disaster day was foreshadowed as early as the opening play from scrimmage, with cornerback James Bradberry swooping in ahead of intended target, Mike Evans, for the interception, setting up a 49-yard Joey Slye field goal.

A 99-yard touchdown drive to end the first quarter saw Carolina stretch their lead to 10-0, with McCaffrey finally running it into the endzone on a gutsy fourth-and-goal call.

With the Buccaneers still desperately struggling on offense, they got a helping hand from their special teams unit, with Ryan Smith showing good hustle in pursuit of Panthers punt returner Ray-Ray McCloud, knocking the ball loose.

Setting up a short field, the Bucs taking over at the Carolina 37-yard line, Tampa Bay were finally able to get on the board as Jones rumbled in from five yards out.

But, on their next offensive possession, Winston was picked off a second time – Bruce Irvin hitting the QB’s throwing arm and Javien Elliott hauling in the resulting wayward throw – setting up McCaffrey’s impressive second score.

Winston would fumble twice more before the half – losing one of them – on his way to suffering six first-half sacks, but the Panthers couldn’t turn that into further points.

Slye got Carolina up and running again in the second half with a 46-yard field goal, before another inexcusable Winston interception, backed up in his own half, gifted the Panthers a chance for more points.

Luke Kuechly undercut Evans’ route and Winston, seemingly having not seen the All-Pro linebacker, threw it straight to him. Samuel did the rest from eight yards out.

Buccaneers kicker Matt Gay bent one in between the posts, a la David Beckham, to finally get Tampa Bay up and running in the second half, but it looked like game over when Samuel opened the fourth quarter with a terrific 13-yard touchdown reception for Carolina.

Tampa Bay, and Winston, responded with two impressive touchdown drives – Winston finding Cameron Brate from 10 yards out and Dare Ogunbowale running in from three yards – two reduce pull to within 11 after a couple of successful two-point tries.

In between, however, Wilson’s fumble on a punt return helped tee up a third Slye field goal, before two late Winston picks as he tried to quickly force the ball down the field cemented a heavy loss.

Both teams are on a bye next weekend, with the Panthers on the road in San Francisco to face a resurgent 49ers outfit in Week Eight. The Buccaneers, meanwhile, take on the Tennessee Titans.

The Bucs are currently in the midst of a 48-day run between ‘home’ games. The last time they played in Tampa was in Week Three – a 32-31 loss to the New York Giants – and they don’t return until a Week 10 meeting with the Arizona Cardinals.