Home Music A Star Is Born in ‘Tina: The Tina Turner Story’ 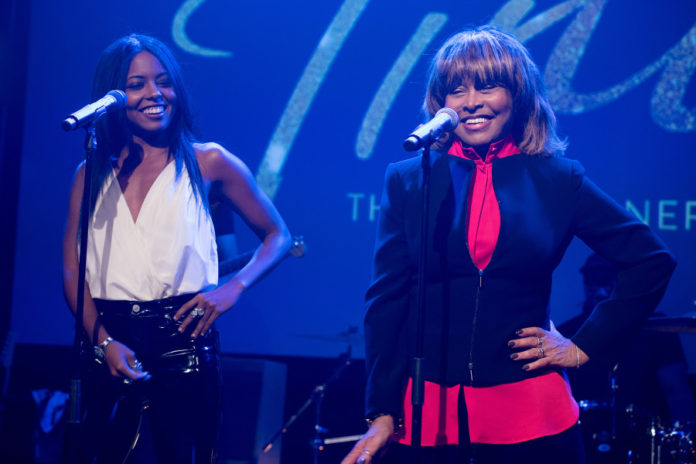 Tina Turner is a star, and so is Adrienne Warren, who unleashes something volcanic from within herself while channeling the Queen of Rock & Roll. Though Warren shines consistently, the vehicle for her bright performance, Tina: The Tina Turner Musical, hits several road bumps while charting the icon’s life from childhood through her Eighties comeback.

Tina starts with a wig: the iconic porcupine-esque blonde hair that Turner sported during her Eighties re-launch as a solo star. Warren as Turner faces the back of the stage, her blonde wig staring down the audience as the rock star listens to the distant chants of her name from over 180,000 Brazilian fans. The scene shifts to a church in Nutbush, Tennessee as the congregation and a very young Turner (who was born Anna Mae Bullock) jump into a gospel remix of Ike and Tina Turner’s “Nutbush City Limits.” Actress Skye Dakota Turner, who plays young Anna Mae, easily steals the stage with her big, beautiful voice and innocent charm.

Related: Tina Turner on Her Journey to Broadway

A dark reality enters the child’s life: Anna Mae’s mother, Zelma (Dawnn Lewis), chastises the child for being so loud and showy in church, while her preacher father comes to her defense. The parents get into a physical altercation; her mother runs off to St. Louis with Anna Mae’s older sister Alline while her father can’t bear to raise the youngest on his own. Warren returns to the stage as a teenage Anna Mae, raised by her supportive Gran Georgeanna (Myra Lucretia Taylor) who encourages the young girl to move to St. Louis with her mom and sister to foster her burgeoning talent. They part ways with a gorgeous duet of Turner’s 1986 B-side “Don’t Turn Around.”

Tina Turner on Her Journey to Broadway 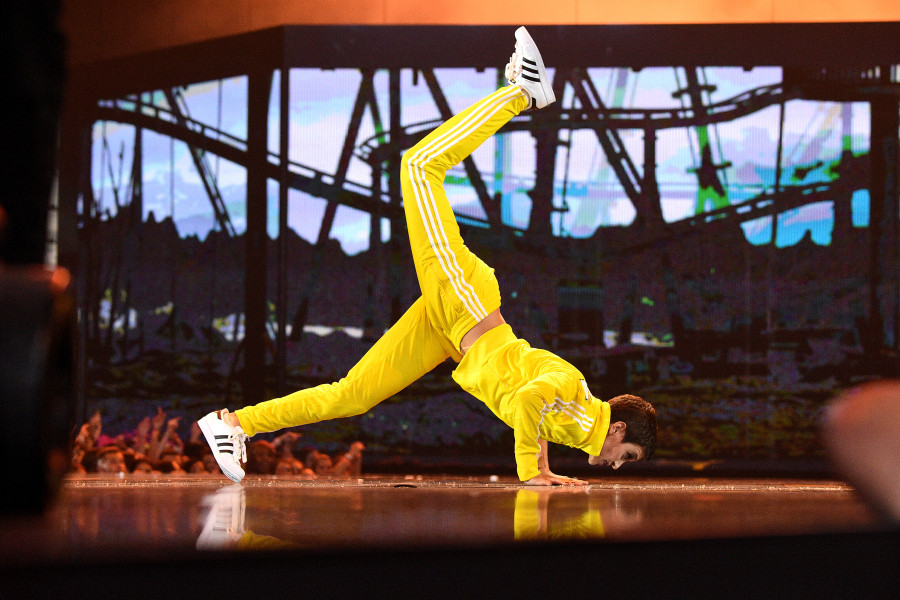 In St. Louis, Anna Mae reunites with her thrilled sister (Mars Rucker) and distant, cold mother. Alline takes Anna Mae out on the town, where they see the Kings of Rhythm, fronted by local star Ike Turner (Daniel J. Watts). At the time, the stardom was deserved: “Rocket 88” had made waves and was widely considered to be the first rock & roll record — even though it had been mislabeled without Ike as the lead artist. Still, the power of his local influence is felt in Tina as the screaming girls in the audience begin vying for a chance to sing with him. Anna Mae, once derided by her mom for being too loud in church as a kid, ends up outshining the rest and eventually joins Ike’s band on tour.

Tina builds a good base before speeding through the rest of Act I. Anna Mae is soon renamed Tina Turner by Ike, who likes the sound of it more than her previous stage name, “Little Ann.” Ike is charming but rigid, refusing to take suggestions from the budding star and paranoid about her leaving the band as they begin to see the national fame he had always strove for. The musical leans a little too heavily on the “charm” part of Ike; one of rock’s greatest villains feels more like a cartoonish Sixties eccentric in this light, and Watts seems to be doing an impression of Eddie Murphy doing an impression of Ike Turner throughout his performance. While we get a firm sense of Ike’s ego — the fear of being forgotten by everyone is never lost in the fabric of his story — his id feels not only superficial but paper thin.

In the musical’s re-telling of Ike and Tina’s “love” story, the pair decide to marry one night in Mississippi as an insurance policy for their futures. With her dreams of rock stardom closer than ever, she agrees, though it’s at the expense of her more loving relationship with the band’s saxophonist, Raymond (Gerald Caesar). When Tina reveals that she is pregnant with Raymond’s child, Ike kicks the saxophonist out of the band for good.

During a sequence soundtracked by Ike and Tina’s 1970 cover of Sly & the Family Stone’s “I Want to Take You Higher,” the Revue embarks on a whirlwind touring schedule soon after the birth of Tina’s eldest song Craig. As she balances motherhood and physically taxing performances, Ike is seen in the background having orgies and doing cocaine. Tina and Ike soon conceive their only biological child together, Ronnie, and grow more famous throughout the Sixties. Phil Spector records with them, focusing on Tina to Ike’s disdain. Her “River Deep — Mountain High” recording session with Spector has a palpable feeling of freedom and catharsis as she performs alone for the first time in the show.

Ike’s characterization lacks any real evilness until the end of Act I, when the pair’s most famous song “Proud Mary” is bookended by two pivotal moments of violence. After Ike beats Tina’s eldest son, she overdoses on Valium. Her still-crying, recently recovered self is shoved into a fringe dress and performs their signature hit. She leaves mid-song, causing Ike to retaliate. She fights back and runs off, ending Act I with a bloody, soon-to-be-divorced Tina in a Dallas hotel with no money, singing “I Don’t Wanna Fight No More.”

Act II moves fast, picking up with single mom Tina raising her two adolescent sons and performing in Las Vegas, struggling to make ends meet. Her manager Rhonda (Jessica Rush), who had also worked with the Ike and Tina Turner Revue, is helping revitalize Tina’s career and ends up bringing her to Capitol Records. Instead of a deal, Tina finds a new manager in young Australian upstart Roger Davies (Charlie Franklin). He encourages her to hire him and temporarily relocate to London to record new music for a few weeks, but not before Tina and Rhonda share an unnecessary manager-artist love duet with “Open Arms.”

In London, Tina meets German marketing executive Erwin Bach, who is played with tenderness by Ross Lekites. Their spark is immediate, but in the studio, Tina has trouble understanding the computerized music she is being pushed to create a hit with. Missing her kids and frustrated with her recording sessions, she sings her cover of “I Can’t Stand the Rain,” which starts off enticingly before turning into another unnecessary duet, this time with Ike, who hovers like a specter behind her. Ike shows up more frequently than he’s needed in Act II, made worse by how little fear was actually instilled by his character in Act I. With the lack of evil needed to make the stakes of his presence as high as required to make the story effective, he felt more like a nuisance than an actual PTSD-driven foil. More attention could have been given to Tina and Erwin, who display the affection Ike and Tina’s relationship had been devoid of but are still undercooked when it came to the pivotal moments in their early union.

After beginning her transformation into leather-clad, blonde-haired Eighties diva, Capitol shuts her down for being too old and black for the label (with one label exec calling her the n-word). Tina and Roger aren’t deterred, however, and decide to perform shows at New York City rock club the Ritz. Warren, and Tina, find their power in the concert setting: with a live band backing her, Warren shines in Tina’s signature black leather mini-dress while belting her first solo hit, “What’s Love Got to Do With It,” embodying the performer’s mannerisms and vocal ticks. A Capitol exec grovels backstage, having been dragged to the show by David Bowie. She gets a new recording contract, but the joy is cut short by her ailing mother. The two share a seemingly sweet interaction, which is then interrupted by Ike who has remained close with a defensive Zelma. If we hadn’t seen Ike already in Act II, the reunion would have felt heavier. Her ability to stand her ground in the face of her two abusers does feel powerful, then drags on as she sings two ballads: a reprise of “Don’t Turn Around” with her mom, who is begging her to stay and then the Mad Max theme, “We Don’t Need Another Hero,” as she spreads Zelma’s ashes in a river.

Tina ends back where the show started: Tina meditating backstage as the crowd in Brazil chants her name. It’s her biggest show yet, and she celebrates the feat with Roger and soon Erwin, who has found his way back to her after she told him it wouldn’t work years prior. As the pair reunites, she sings “(Simply) The Best,” another gargantuan hit for the artist; the stage turns into a massive concert with her full band and back-up singers. After bows, the concert continues. Warren is electrifying while performing “Nutbush City Limits” and “Proud Mary,” continuing to transform herself fully into the legendary performer. At times, the resemblance is so uncanny it feels like you have time traveled to this 1988 show and are watching the real Tina Turner live. If only the show had found a way to harness that lightning bolt of energy in totality, though the moments when it hits almost makes up for some of the flat notes.