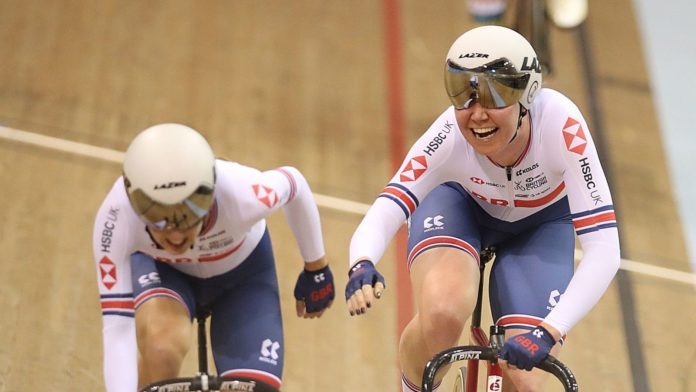 Katie Archibald and Elinor Barker added to their medal collection with silver in the women’s Madison, while Mark Stewart took a remarkable men’s omnium silver on the final day of the UCI Track World Cup in Glasgow.

Amid the usual chaos of the Madison, Archibald and Barker had to battle their way through a race in which they too often found themselves out of position as Australian duo of Annette Edmondson and Georgia Baker won gold.

The penultimate event of the night then saw Dundee’s Stewart – called into the team as a late replacement for the ill Ethan Hayter on Saturday night – ride his way to second place behind European champion Benjamin Thomas in the omnium.

Great Britain ended the weekend as leg 2 winners of the UCI Track World Cup in Glasgow.

All eyes had been on Archibald and Barker in the Madison after they were part of Great Britain’s gold medal-winning team in the women’s team pursuit on Friday.

But positional errors cost them as they invested too much energy closing gaps rather than challenging at the front.

“There were moments where we avoided some crashing and carnage as a consequence of being out of position, which is bittersweet in itself,” said Archibald, who nevertheless declared herself happy with silver and encouraged by the result.

“I feel we could have done better. It’s positioning throughout. You can see when we invest, we’re winning the sprints and it’s just kind of spreading that commitment throughout so we’re in position.”

Glasgow, what an outstanding crowd for an outstanding venue. Thank you for showing all our incredible riders at the Sir Chris Hoy Velodrome so much support.

Here’s to 3 days of amazing racing!

Stewart’s performance was one of the stand-out moments of the weekend.

The 24-year-old had been at home in Manchester watching the racing on television on Saturday night when he got a call asking him to travel to Glasgow as a replacement for Hayter, who had just ridden to second place in the Madison alongside Ollie Wood despite a stomach bug.

Stewart only arrived in Glasgow at 1.30am and having been handed the opportunity, he took it with both hands.

The 24-year-old won the tempo race and then rode strongly in the closing points race to take silver behind European champion Benjamin Thomas.

“With the strength of our squad, it wasn’t just, ‘Come up and see what you can do’,” Stewart said.

“You know if you’re going to race, you’re taking someone’s place and you’ve got to perform, so I was actually quite nervous.

“You’ve just got to keep no stone left unturned so when an opportunity like this comes along you can deliver.”

Jason Kenny once again missed out on a medal, however, as he finished fourth in the final of the men’s keirin, with France’s Sebastian Vigier claiming gold.

“I was caught napping a bit when the [derny] pulled off and ended up dead last, which is a disaster because it’s not a long race,” Kenny said.

Katy Marchant, who won the women’s keirin on Saturday for her first gold medal at this level, was unable to follow it up in the individual sprint and was eliminated in the quarter-finals.