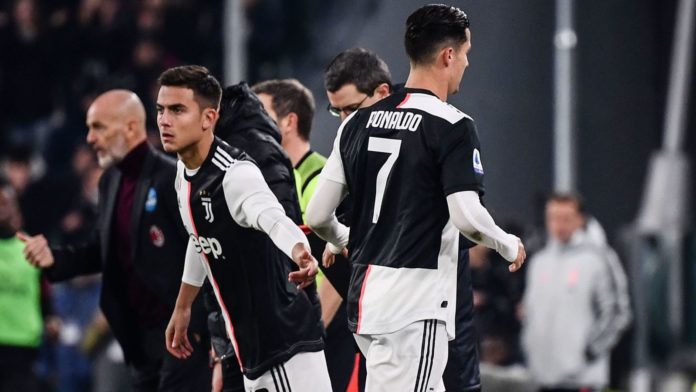 Paulo Dybala replaced Cristiano Ronaldo and scored the winner as Juventus beat AC Milan 1-0 on Sunday to move back to the top of Serie A.

AC Milan had the better of the chances but substitute Dybala scored 13 minutes from time to secure victory for the eight-time defending champions.

Juventus restored their one-point advantage over Inter Milan in the Serie A standings after Antonio Conte’s side’s 2-1 win over Hellas Verona on Saturday.

AC Milan arrived at Allianz Stadium with just one win in their last four matches but forced Juventus goalkeeper Wojciech Szczesny into several tough saves in the first half.

Ronaldo has struggled with a knee injury recently and was substituted for the second straight match early in the second half. The Portugal international did not look happy and walked straight down the tunnel.

But the substitution was to pay off when Dybala collected the ball from Gonzalo Higuain, dribbled his way into the area and fired into the bottom left corner.

Atletico Madrid were heading for another disappointment on Sunday before Alvaro Morata came to his side’s rescue again.

The striker provided the spark Atletico needed after his team fell behind against Espanyol thanks to Sergi Darder’s long-range effort, which increased the pressure on Atletico following their three-match winless run and victories by Spanish league leaders Barcelona and Real Madrid on Saturday.

Morata led Atletico’s rally with an assist to Angel Correa’s goal just before half-time. He then scored his sixth goal in as many matches after the break to put the team back on top before Koke sealed the 3-1 victory in injury time.

The home win moved Atletico to third place with 24 points, one point behind Barcelona and Madrid, who both have a game in hand.

Sevilla also kept the pressure up at the top by beating Real Betis 2-1 in the Seville derby.

Lucas Ocampos and Luuk de Jong scored for the visitors, while Betis got on the board through Loren Morn.

It was Sevilla’s first win after two consecutive league draws. Betis, coming off a draw at Real Madrid, dropped to 17th place, just outside the relegation zone.

Elsewhere, Japanese teenager Takefusa Kubo, who is on loan from Real Madrid, scored his first Spanish league goal on Sunday, leading Mallorca to its first win in four matches with a 3-1 home win against Villarreal.

Athletic Bilbao came from behind to defeat Levante 2-1 to stay five points off the lead, in sixth place, while seventh-place Getafe drew 0-0 at home with 10th-place Osasuna.

Borussia Monchengladbach remained clear at the Bundesliga summit after beating Werder Bremen but it was Freiburg‘s home win over Eintracht Frankfurt that created the headlines.

Freiburg were on course for a 1-0 victory and a share of second place when, deep into stoppage time, controversy struck as Frankfurt captain David Abraham barged over home coach Christian Streich, sparking a mass melee involving both teams.

The 54-year-old Streich, standing in his technical area, was knocked onto his back after Abraham caught him with his shoulder as he ran off the pitch in pursuit of the ball.

Abraham was subsequently sent off despite remonstrating with the referee, as was Freiburg midfielder Vincenzo Grifo – who had earlier been substituted – for his role in the ugly touchline fracas.

That took the number of red cards in the match to three, with Frankfurt having also lost Gelson Fernandes on the stroke of half-time to a second booking.

The only goal of the game was scored by Nils Petersen in the 77th minute, the Germany striker drilling home a first-time finish for his fourth goal in his last three league matches.

Petersen’s goal saw Freiburg move level in second with Bayern Munich and RB Leipzig, who both won on Saturday, but Monchengladbach remained four points clear with their 3-1 victory over Bremen.

Two goals in quick succession from Ramy Bensebaini and Patrick Herrmann midway through the first half set Monchengladbach on course.

Herrmann’s second just before the hour mark made it 3-0 and although the hosts saw Bensebaini sent off and Leonardo Bittencourt pull a goal back for Bremen late on, Marco Rose’s men had done enough.

Also on Sunday, Bayer Leverkusen beat Wolfsburg 2-0 to pick up their first Bundesliga win in five matches and climb up to eighth.

Karim Bellarabi gave Leverkusen a 25th-minute lead and Paulinho settled the contest late on as Wolfsburg suffered a fourth successive defeat in all competitions.

Dimitri Payet scored twice as Marseille won 2-1 against Lyon in Ligue 1 despite the second-half dismissal of Alvaro Gonzalez.

Payet put Marseille two goals to the good at half-time, first with a penalty and then a clinical finish as he was involved three times in a rapid counter-attack.

The second half saw a delay of around five minutes as thick fog descended on the Stade Velodrome but Moussa Dembele pulled one back after an error from Gonzalez, who was then shown a straight red card for a professional foul on the ex-Celtic striker.

But the 10 men held on as Martin Terrier’s effort in the 90th minute flashed millimetres wide and Jason Denayer’s header was easily saved.

St Etienne climbed to fourth place with a 3-2 win at Nantes.

The hosts led twice, through Ludovic Blas and Imran Louza, but Miguel Trauco equalised on the first occasion and Denis Bouanga’s brace secured victory for Claude Puel’s side.

Montpellier are sixth after an emphatic 3-0 win over Toulouse.

Andy Delort’s sublime chip was disallowed for offside but he neatly created Gaetan Laborde’s eventual opener just before half-time and victory was secured in the second half by Damien Le Tallec’s header and Teji Savanier’s long-range strike.

Rennes came from behind to beat Amiens in the day’s other game.

M’Baye Niang’s close-range finish and Raphinha’s penalty, awarded by VAR, settled the match in the second half.