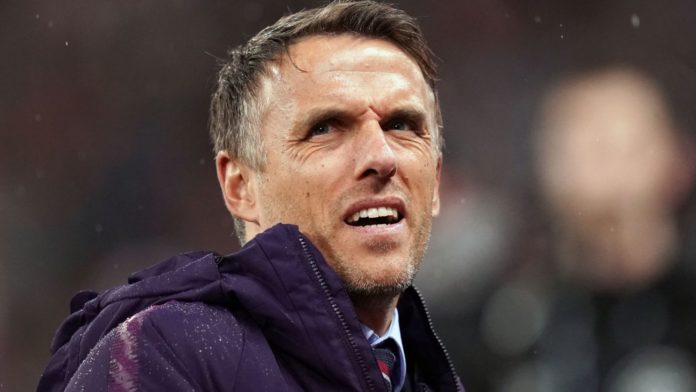 England Women’s coach Phil Neville has insisted he won’t change his side’s style of play despite Saturday’s 2-1 loss to Germany leaving the Lionesses with just one win from their last seven matches.

Playing in front of a record crowd of 77,768 – the highest ever for an England Women’s home fixture – at Wembley, the hosts went behind after just three minutes through Alexandra Popp’s opener.

Ellen White levelled with a clever finish just before half-time, after Nikita Parris had earlier missed a penalty, but Klara Buhl’s 90th-minute goal earned victory for the Germans.

“Ultimately, the run that we’re on means something has to change,” Neville said. “Performance levels have to change and it’s up to me to find that formula.

“We’ve got to look at a way of now finding a tweak to make sure that we start winning games again.”

Neville’s side have qualified automatically for Euro 2021 as hosts, but, by the time the competition starts, will have gone two years without playing competitive matches.

The Lionesses have won just once since their fourth-place finish at the World Cup this summer and concern around the team is growing despite squad rotation potentially contributing to the poor run.