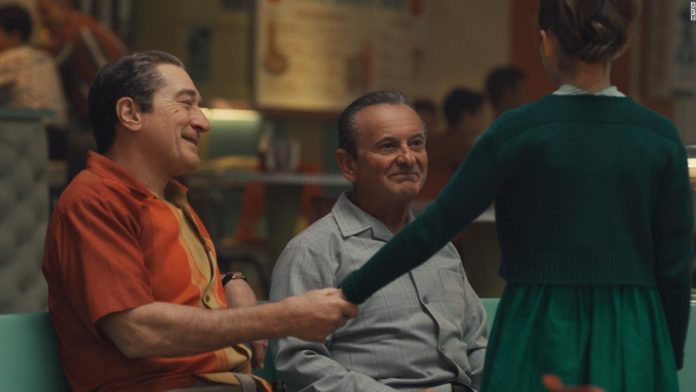 The release of his epic Netflix film, “The Irishman,” reunites him with his “Goodfellas” stars Robert De Niro and Joe Pesci.
It also offers up the opportunity for me to share a not-so-secret secret.
Here’s hoping you’re not a snitch.
The following is an essay I penned for the CNN podcast “Lisa, Sandra and Kristin Go to the Movies.”
My husband believes I have a serious problem, so now I try to hide it from him.
I indulged in this passion/”problem” so much when we first got married that one day he stood in front of me and said, “You do realize that this is not at all normal right?”
So now I try to sneak it in when he’s not at home, or sometimes when he’s upstairs practicing his keyboard. I just can’t seem to help myself. He catches me often, but I don’t care. I just ready myself for a snarky comment, or at the very least a massive eye roll.
Before your mind starts going in all types of directions and I have to whack you, I’ll share with you my obsession. But it has to stay between us, ok? An omerta, as it were.
I can’t stop watching the movie “Goodfellas.”
It’s bad y’all. At one point I would come home from work every day and put it on. I’m now down to about two or three times a week. I can see you rolling your eyes — just like my significant other — and I’m totally ok with that.
The 1990 mobster film starring Ray Liotta, Robert De Niro and Joe Pesci is so brilliantly executed — pardon the pun — that I can’t look away.
Based on the real-life story of mob associate turned government star witness, Henry Hill, it’s the tale of how Hill went from a boy who falls in love with organized crime to losing it all. Pesci alone was worth the price of admission as his portrayal of mobster Tommy DeSimone is a master class in how to play a ruthless killer.
The film sent me down a rabbit hole of reading everything I could about the real life people behind the characters, including the book by Nicholas Pileggi that the movie is based on.
I wasn’t able to see “Goodfellas” multiple times when it was playing in theaters because I was younger then and definitely broke. But once it was on DVD and later streaming, it became my jam. I’ve even saved the sanitized version from television on my DVR, because — if I’m honest — I’m not as big a fan of the profanity and violence as I am the story.
That may sound strange for someone who professes to love a film that would seem to glorify mob life, but it doesn’t really. Directed by the master of cinema, Scorsese, “Goodfellas” is actually an unflinching look at how the mafia isn’t glamourous at all.
Yet still we can’t help but love such films.
Long before “The Godfather,” there was the 1927 silent film “Underworld,” which set the template for movies about the rise and fall of a gangster.
While most of us — I hope — have no desire to break either the law or legs, we recognize that these stories are in many ways as American as apple pie. At their heart they are about familial bonds, traditions, ambition and reaching for a life better than the one that you have.
It’s about being almost fearless in pursuit of whatever you want. And well within us, whether we want to admit it or not, there’s a tiny bit of admiration for people who have the will to do whatever it takes.
At the same time, we are repelled by those who hurt others and commit violent acts. On this front, mob movies still satisfy us because (spoiler alert) the truly evil people always get their comeuppance in the form of either death or incarceration.
There is no “happily ever after” when your career has been built on destroying other people’s lives.
With all that, how can you not love these films? I can’t.
So much so that “Goodfellas” has become an integral part of my “how cool are you and I going to be” test when I meet new people. If I say “Funny how?” and don’t get back a “Funny how, like I’m a clown, like I amuse you?” I know that we can only go but so far in this thing of ours.

How to Raise Media-Savvy Kids in the Digital Age