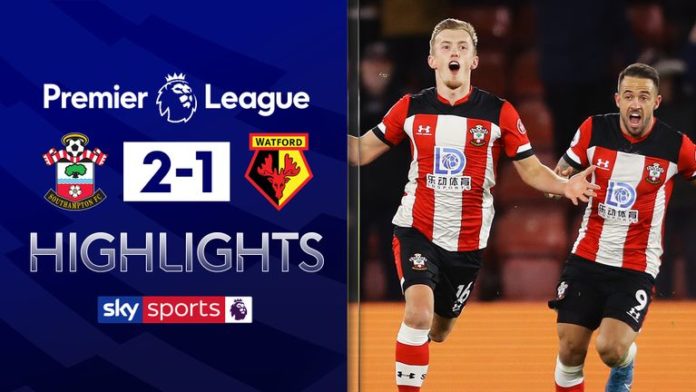 James Ward-Prowse fired Southampton to a precious 2-1 victory against fellow relegation strugglers Watford and earned them their first home win since April.

Both teams were languishing at the bottom of the table heading into the vital game at St Mary’s, and it was Watford who got themselves ahead in the first half as Ismaila Sarr (24) coolly finished for his first Premier League goal.

But Southampton battled back in the second half, with Danny Ings (78) bundling the ball home to equalise before a classic Ward-Prowse free-kick sealed an invaluable three points for the Saints, who last won at St Mary’s on April 13 against Wolves.

It sends Southampton into 18th, two points from safety, although Norwich and Everton, who sit either side of them, play live on Sky Sports on Sunday. Watford remain rooted to the bottom of the Premier League table.

How Southampton secured a big win

Despite the poor form of both teams, there were good chances at either end in the opening 10 minutes. A poor touch from Cedric Soares saw the ball land to Sarr with the box open in front of him, but his effort was saved low by Alex McCarthy. Pierre-Emile Hojbjerg also saw a shot lift over the crossbar, before some superb play from Nathan Redmond led to his own chance, but it was saved well by Ben Foster.

The game then settled into a rhythm as Southampton had the better of the possession, but it was Watford who broke the deadlock in the 24th minute. Etienne Capoue hooked the ball down the right-hand side, but some poor control from Jack Stephens once again put the ball into Sarr’s path and he did not miss this time, driving into the box before lofting home over McCarthy with a cool finish.

Man of the match: Ismaila Sarr.

Watford could have added a second not long after, but McCarthy produced two wonderful stops. The first showed superb reactions as he beat away a toe-poked Sarr shot with his legs before a ball from Gerard Deulofeu glanced off his outstretched fingertips and away from the incoming Sarr at the back post.

Southampton looked to be meandering to another home defeat in the second half, but, with around 20 minutes to play, their fortunes began to change. They went close in the 77th minute, but had an effort cleared off the line. Substitute Shane Long tried to send the ball goalwards after a scrappy attempt from Ings but he did not make great contact, allowing Craig Cathcart to get back and hack the ball away.

But there would be no second stroke of luck for Watford as Southampton deservedly levelled a minute later. Moussa Djenepo easily got around Jose Holebas on the right-hand side before slotting the ball into the feet of Ings at the near post. The striker then managed to bundle the ball home despite an incredibly crowded six-yard box, but replays later showed that the ball hit Djenepo’s hand in the build-up so could have been ruled out if VAR had spotted it.

Five minutes later, and Southampton finally secured a much-needed home victory. Hojbjerg was fouled by Capoue on the left for a free-kick which Ward-Prowse and Ryan Bertrand lined up for, but there was no doubting who would take it as Ward-Prowse swept the ball goalwards with one of his trademark free-kicks. Foster got a hand to it, but the power of the strike was too much as it smashed into the back of the net to send St Mary’s into raptures.

Man of the match – Ismaila Sarr

Sarr came into the Watford side for Andre Gray and certainly proved a worthy addition. For 70 minutes, he was the bright spark of the Hornets’ attack and had numerous first-half chances.

Southampton had McCarthy to thank as he stopped Sarr from nabbing a hat-trick in the opening period, but his finish for the goal he did score was superb and a fine way to net for the first time in the Premier League. Stephens found it hard to handle his pace, which, added with some other defensive errors, allowed him through a number of times.

He also had a 90 per cent passing accuracy – the highest of the Watford team – and the Hornets will be hoping he can produce similar performances in the coming weeks as they look to battle the drop.

Southampton manager Ralph Hasenhuttl: “There is tonnes of weight falling off the shoulders. You could feel it, in the first half, my team couldn’t move, I don’t know why. It was a completely different performance to last weekend but in this stadium, in this moment, after all the bad results this season, it feels like it was really shocking for me.

“It cost me a lot of building up at half-time and a few substitutes in the second half, who made an impact and came in with a fresh energy. Then it was a completely different second half where we deserved to score. Finally it was an unbelievable turning of the table and an important win for us, for sure.

“It’s important not to analyse this game so high because it was from the pressure we had before the game to win this. It was clear we were not playing fantastic or really good football, but it was so difficult in the first half. I couldn’t believe it, so I’m happy that we turned it around. I’m happy that we got the three points and it gives us a little lift for the Wednesday game.”

Watford manager Quique Sanchez Flores: “We played really well in the first half, we had the opportunities on the counter-attack to score the second goal but we didn’t do that. The second half, with a change after one hour, Southampton improved and then we had more problems. Elements are not working with us, they’re working against us and it is hard to rate this kind of result when you lose, when you know that, for a long time, we had control of the match.

“It’s not about me. The most important thing is I’ve come here to help a friendly team for me. I love all of them, the fans, the players, the owners and everything so what they can do is try to push… I’ve come here to suffer with them until they decide the opposite thing.”

The next Premier League games come thick and fast with Southampton hosting fellow relegation strugglers Norwich on Wednesday, while Watford travel to Leicester. Both games are 7.30pm kick-offs.

Defining a new vision and framework of action: the FIA High Level Panel for Road Safety meets in Stockholm

Apple might finally let you pick Chrome over Safari in iOS...

Belgium contributes to FAO and the Government of Ethiopia’s desert locust...

Almost half the population in South Sudan in severe acute food...