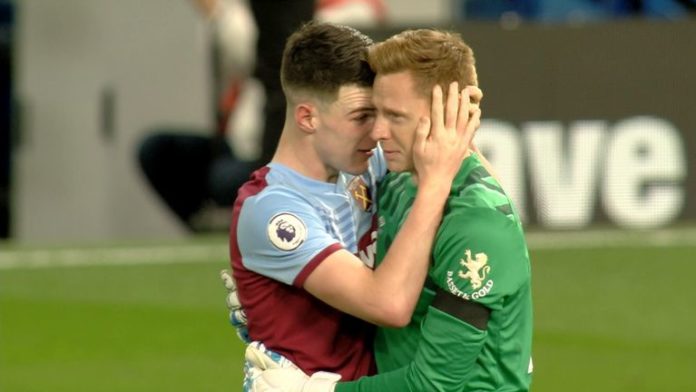 West Ham goalkeeper David Martin revealed he could hardly eat for two days in the build-up to his Premier League debut at Chelsea.

Martin pulled off a clean sheet on his top-flight bow as West Ham sealed a 1-0 win at Stamford Bridge, with his dad and former Hammers stalwart Alvin watching from the stands.

Martin admitted he was in tears as he walked into the crowd to hug his dad, the former England defender who spent 20 years at West Ham between 1976 and 1996.

The 33-year-old former Millwall goalkeeper shored up the Hammers’ defence in replacing Roberto, who had leaked three goals in nine games, as West Ham sealed a first league win at Stamford Bridge in 17 years.

‘I’ve been struggling to eat’

​​​​​​”It doesn’t feel real; I’m 33 now, I’ve had a decent career, I’ve played quite a few games but it still doesn’t prepare you coming into this game,” said Martin.

“I’ve been struggling to eat for the last two days. Cress (Aaron Cresswell) was laughing at me because my plate kept being taken away and I couldn’t finish my food.

“When I saw my dad we were both in tears, so we didn’t actually say a lot. But for my dad to see that here with the club he played for for 21 years, to make my debut, keep a clean sheet and get the win for the boys more importantly, it’s just a fantastic feeling.”

West Ham boss Manuel Pellegrini admitted he was relieved that a clutch of changes had paid off as the Hammers ended an eight-match winless streak in all competitions.

The Chilean’s job remains on the line at the East End club, but he insisted he can push his side back in the right direction.

“When you don’t win you are a beast and when you do you are a genius,” said Pellegrini. “For the team, for West Ham, for me and everyone, I think they did very well.

“But not only because I changed the goalkeeper, I think everyone produced the intensity you needed to win the game.”

Hailing Martin’s debut performance, he continued: “Of course, we know his family is linked with this club, it was not easy for him to make his first Premier League start.

“But I think that from the first time I spoke in the week with him I felt he was prepared. Especially before the game he was very quiet but he demonstrated what he needed throughout the 95 minutes.”

“Shocked isn’t the word, I’m more disappointed,” said Lampard. “We didn’t perform the way we wanted to. But I do believe in the squad.

“There haven’t been many times I have said we were below par, but today was one of those days. I don’t think it’s time for harsh reactions and judgements, it is time for a look at a bit of character to see our reaction.

“This is a reality check for everyone; me, the players, the fans. We have all been pretty happy with a lot of things so far but today is a reminder of the harsh realities of the Premier League and the realities of where we are at.”

Defining a new vision and framework of action: the FIA High Level Panel for Road Safety meets in Stockholm