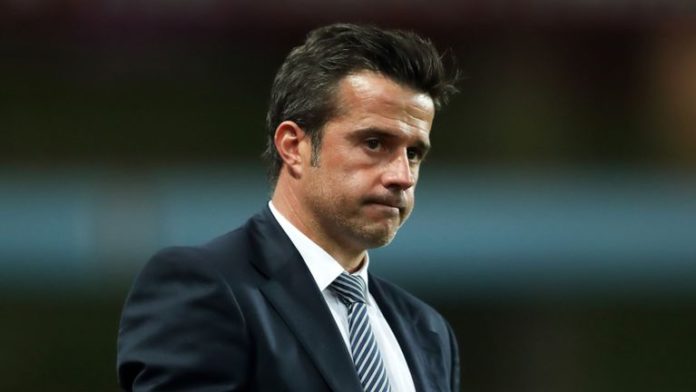 Watch Leicester vs Everton live on Sky Sports Premier League on Super Sunday from 4pm; kick-off is at 4.30pm

Everton are a club in a state of limbo.

The spectre of David Moyes looms large over Marco Silva. The writing is on the wall according to the club’s former striker Kevin Campbell – quite literally with the graffiti scrawled outside the gates of Goodison Park after his tenure reached an all-time low.

Speculation has been mounting about the Everton manager’s future after Saturday’s 2-0 defeat at home to Norwich, after which Silva spoke with the board and majority shareholder Farhad Moshiri.

Everton sit 16th in the table with two wins in their last nine games, and will face Liverpool, Chelsea, Manchester United and Arsenal in the Premier League following their clash against Leicester, live on Super Sunday.

Sky Sports understands Moyes is in a strong position to return to one of two former clubs, with Everton and West Ham considering their managers’ future – but contrary to reports of division, the Everton board is stronger than ever.

The dismissal of Unai Emery as Arsenal head coach only intensifies the pressure on Silva, with former midfielder Mikel Arteta – among those previously linked to the Goodison Park hotseat – now firmly among the candidates to take over at the Emirates.

Speaking on Friday, Silva said: “If you want to be a winning team, you have to be sad and angry with bad results and performances.

“But we know we can react in the next game. I saw a good reaction from the players in the past few days. I am seeing [leaders] and I believe they can show up.

“We have to do it as a team, not just one, two or three. This is a moment for the leaders to show up and take responsibility. First of all myself, like always.

“On the pitch we have to be strong as a collective. Then some individual players have this [leadership] quality and can take responsibility as well.”

The trip to the King Power Stadium could prove critical. Everton are four points off the relegation zone, but the reality is they are also four points off sixth place. That statistic could work both for and against Silva, with the season far from irretrievable.

The club’s board, including chairman Bill Kenwright and the director of football Marcel Brands are faced with an almighty decision with the January transfer window on the horizon.

But having granted Silva the best part of £200m to spend over his 18 months in charge, is he afforded more funds in order to build the team in his image?

There is a growing feeling that the answer is ‘no’ with four wins in 13 league matches all season, and defeats to all three promoted sides.

Jamie Carragher told Monday Night Football: “This felt like a line had been crossed – this is Norwich who hadn’t scored an away goal in months. That was the worst day in Silva’s tenure.

“The tough run of games coming up is keeping him in a job. If you’re bringing in a new manager you don’t want to bring him in with a run like that. I think Marco Silva will get the Leicester and Liverpool games – if that game on Merseyside goes badly then there’s no way back.

“I’ve got Everton fans in my family and every candidate they’ve mentioned they’ve also said they don’t want them. David Moyes to come back in almost in a Sam Allardyce role – they are so against that you wouldn’t believe.

“Personally, I can’t believe that, considering the job he did. It’s like they are judging David Moyes on what he’s done since Everton. They don’t want Eddie Howe. There’s talk of Mark Hughes.

“The one that could work would be Mikel Arteta with his Everton connections having worked under the best manager in the world a City. I think there will be a change as I can’t see Everton getting much from those set of results.”

The atmosphere was toxic at Goodison last Saturday as home supporters turned on their manager in an unprecedented manner, joining in with “sacked in the morning” chants from the travelling contingent. But Silva has never lacked self-confidence and appears to block out the noise better than most who have been on the brink.

It’ll be a Festive Season to remember on Sky Sports with 46 matches over 33 days from the Premier League, EFL and Scotland

He showed an understanding of those raw feelings that grip football supporters after a disappointing result. After all, it was the fourth time in a row he had lost a home game to a side sitting bottom of the Premier League table, so he should know.

As Silva and his assistant Luis Boa Morte headed for a two-day break in Lisbon following crisis talks, the board in turn might have concurred with Carragher, concluding that it is the daunting run of games between now and Christmas that has kept him in a job.

He will have pointed to his record from the corresponding set of fixtures last season and argued he accumulated nine points from those five games. But there is little evidence he can replicate that feat this time around.

Everton lack a core of senior players who can set the standards in terms of the levels of expectations demanded from them. With young players and those with little experience of playing in the Premier League comes inconsistency, and that is what Everton have suffered from this season.

“Watching Everton last season, I felt like they were nearly there,” Gary Neville added. “They were on the right track – you saw a younger team emerging and there was plenty of movement. They needed a striker, but when they signed Moise Kean, we all thought he was the missing piece of the jigsaw to catapult them.

That equates to an expected points (xPTS) of 20.81 – which compared to that of the rest of the Premier League would put them in sixth, above second-placed Leicester.

Silva admitted his players were “afraid” but leadership must come to the fore, now more than ever in his faltering tenure.

What you came to expect of Everton under Moyes as the bare minimum was a consistency around work ethic, application and attitude – and the nature of Norwich’s goals last Saturday stank of all of these three things totally lacking from Silva’s side.

Facing the league’s top two sides in a matter of days, most onlookers will not give the under-fire manager a prayer of arresting the slide before he has the chance of being in the dugout again at Goodison.

Brands has also called for unity during a rare interview with the club. The Dutchman acknowledged the need for improvement, saying: “Of course, we know in sport, as always, you have to perform – that’s me, the manager, the players, for everyone.

“It’s also important, especially in this club, after a couple of years of instability, to stick together in this situation.

“I think it is important that everyone has the feeling that we can turn this around to better results. Most people know that I always go to the dressing room after the game, to see how the atmosphere is.

“Of course, everyone was disappointed last Saturday but you saw also really in the eyes of the players the fire that they want to resolve this, to turn this around – together with the whole staff.

“That’s important coming up towards the next couple of games. They will be tough games but games where we can improve.”

In Everton’s 141-year history there have only been 22 different permanent managers, but to avoid becoming the fourth casualty in the space of three-and-a-half years under Moshiri, Silva must find his leaders.

Against a mean, well-oiled Leicester side riding on the crest of a wave under Brendan Rodgers at present, experience and maturity will be needed like at no other time under their embattled manager.

It might well prove a grim reality check of how far away Everton still are in search of their long-held goal of breaking into the top six.

When the Portuguese first arrived on these shores with an impressive record of winning silverware at Estoril and Sporting Lisbon and the domestic title in Greece with Olympiakos, he was compared to Jose Mourinho given his track record of not sticking around clubs for too long but leaving with medals to show for his time in charge.

His 18 months at Everton already makes it the second-longest stint he has had in six jobs at the age of 42. But that has become the average length of managerial reigns at Goodison during the Moshiri years.

In place of the fear, a Mourinho-like siege mentality must be created.

Leicester vs Everton is live on Super Sunday from 4pm; kick-off 4.30pm. Sky Sports customers can watch in-game clips in the live match blog on the Sky Sports website and app.

UK and US blame Russia for ‘reckless’ cyber attacks