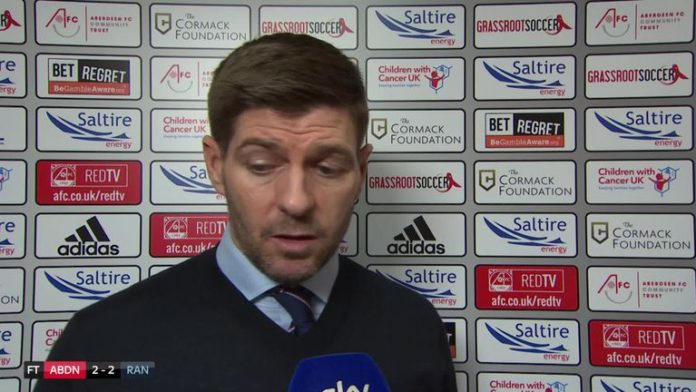 Steven Gerrard revealed he received an apology from John Beaton after the referee failed to award Rangers a “blatant” penalty at Pittodrie.

The official spotted Aberdeen midfielder Lewis Ferguson’s foul on Alfredo Morelos late on in the 2-2 draw but decided it had taken place outside the Dons box and gave a free-kick. It was another moment of frustration for Gerrard, who watched his side throw away a two-goal lead.

The spot-kick incident could have swung the match back in their favour but they now find themselves two points behind title rivals Celtic, who they play in Sunday’s Betfred Cup final.

“It’s 100 per cent a penalty,” said Gerrard. “I’m surprised it’s not given as the referee is three yards away and looking right at it. He has seen it since and agrees it is a blatant penalty he has missed.

“I have to be very careful what I say, obviously. But I don’t think there will be a more disappointed person outside of Rangers tonight than John.

“He has just explained to me that he got it wrong, right in front of his eyes, and there is no excuse. There is nothing more I can say on it to be honest.

Strikes from Scott Arfield and Ryan Jack put Rangers in charge after 30 minutes but Jon Gallagher – who was to blame for the Light Blues’ opener – made amends to pull one back before half-time and Andy Considine’s close-range finish just after the break levelled things up.

Gerrard said: “It’s a tough one. We were dominant and controlling the game. I was so pleased with what I was seeing but we conceded a silly goal and it flipped the whole momentum of the game.

“We were too confident at 2-0 and Aberdeen went direct in the second half and we couldn’t handle the pressure.

“We conceded another goal and they had chances again. It’s frustrating as had we done what we were doing we would have won the game. We need to manage games better, especially when you are away to your rivals. At 2-0 up, to concede a goal like that is disappointing.

“I never got the reaction I wanted in the second half. We turned the ball over and they continued to turn the heat up. They looked as if they were going to punish us. We need to reset the mindset very quickly as it is a cup final against our rivals.”