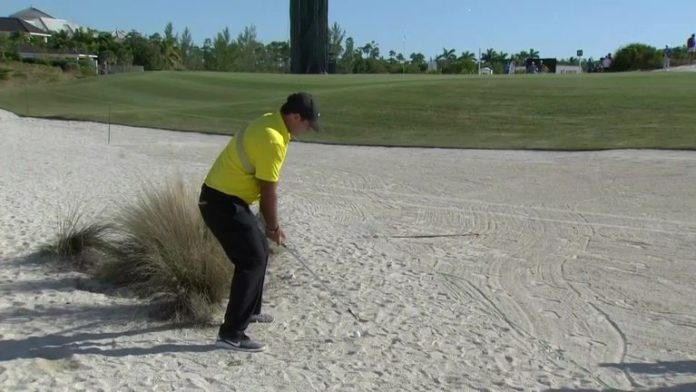 Patrick Reed was given a two-shot penalty after appearing to flatten out sand before a bunker shot during the third round of the Hero World Challenge.

Reed was docked the strokes after twice moving sand while taking a practice swing in a sandy waste area at the 11th hole at Albany Golf Club, which served to marginally improve his lie.

The 2018 Masters champion was deemed to have improved his intended line of play, violating rule 8.1a.

The halfway leader thus carded a round of 74 and fell three strokes behind the 54-hole leader, fellow American Gary Woodland.

Reed seemed to question whether the penalty was warranted, but said he would put it behind him and focus on the final round.

“At the end of the day you have to accept the penalty and move on,” he told reporters. “After seeing the club go back and brush some sand, they thought that’s a breach of the rules.”

The television pictures were filmed from behind the ball, while Reed was looking down on it, something he said could lead to different interpretations because of the different angles.

“It’s my word against their word. They weren’t standing there,” he said.

Rules official Slugger White said whether Reed intended to brush the sand or not was irrelevant.

“You could see the path of the sand come away on two different occasions,” White told reporters.

“He did it the first time, put the club down again and did it another time. Intent would not matter here.”

Tournament host Tiger Woods roared into contention for a sixth title at the Bahamas-based competition.

The Masters champion carded a five-under-par 67 in the third round of the limited-field event which raises funds for his foundation.

At 11-under for the week, Woods trails leader Woodland by two shots.

Woodland had five birdies and a single bogey in his 68 to sit 13 under, and his round was matched by Sweden’s Henrik Stenson, who is a shot behind the US Open champion in second.

Woods had two birdies and a bogey on his front nine, before birdieing the 11th from 20 feet.

Back-to-back gains at the 14th and 15th were then followed by a closing birdie as Woods left himself well placed for a final-round title tilt.

The event is finishing on Saturday to give the US Presidents Cup team – which will be captained by Woods and features 11 players involved this week – time to travel to Melbourne to take on the International team next week.