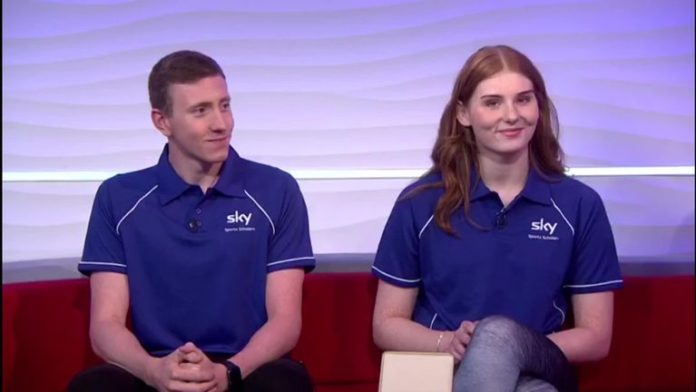 Just 24 hours after fellow Sky Sports Scholar Max Litchfield secured gold in the 400m individual medley on the opening night, it was the turn of the 18-year-old Anderson to steal the headlines on Friday.

Teenage Anderson blew her opponents away in the 100m Freestyle final to secure her maiden individual medal at this level and a European title.

“I’m so shocked but so happy,” the 18-year-old said. “I’m really pleased with how I swam it and to be in that field is amazing.

🥇@freyaandersonn is the Golden Girl in Glasgow, claiming her first senior international title❗️👑

Catch up on all the Friday evening #EuroSwim2019 action from Tollcross 👇https://t.co/P7Ggxv3WX7

“It was definitely nerve-wracking being the fastest qualifier from the heats and semi-finals so I’m just glad I stepped it up again!

“It feels amazing – I definitely didn’t expect it. I came into this meet not expecting anything, so to come away with a gold, I
can’t believe it.”

Anderson was unable to add another a medal in the final event of the night in the relays.

The Birkenhead-born swimmer, along with Georgia Davies, Anna Hopkin and ex-Scholar Siobhan-Marie O’Connor, had broken a 19-year-old British record in the 4x50m freestyle relay heats.

However, they had to settle for fifth in the final.

Duncan Scott broke his personal best and a British record as he topped the qualifiers for the men’s 200m individual medley, but finished fourth in the final, as did Laura Stephens in the 200m butterfly.

O’Connor missed out on the podium by less than a tenth of a second in the women’s 100m individual medley, eventually coming fourth.