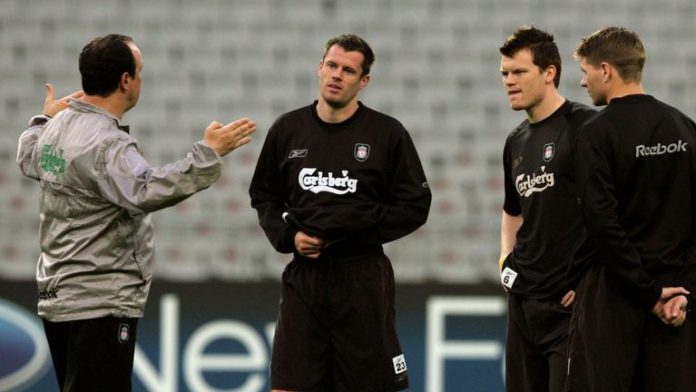 It is a night that will never be forgotten. But, as Jamie Carragher explains, the Champions League final is the one game in a season that rarely gets the full MNF treatment. Until now…

Liverpool had finished fifth in the Premier League behind neighbours Everton, and the defensive frailties that had undermined their domestic campaign were exposed during the first half by Carlo Ancelotti’s AC Milan side.

The club’s run to the final saw Rafael Benitez often play Steven Gerrard in the No 10 position, but the Spaniard elected to field his talisman alongside Xabi Alonso in the midfield from the start, with Harry Kewell playing behind Milan Baros.

The Reds had kept two clean sheets in the semi-final against Chelsea while they had also gone to Juventus and kept the Italians at bay. Within 45 minutes, their hopes of a fifth European Cup appeared to have gone up in smoke.

“In the end, it was a mistake – not because of Harry, but because of the position of Kaka,” Benitez now concedes. “He was killing us behind the lines, because Stevie would go forward. I thought we could control him with the two midfielders.

“But when we went forward, there was space behind. Stevie was a box-to-box midfielder and Xabi is not the quickest.”

The inclusion of Kewell meant Dietmar Hamann was left on the substitutes’ bench – but Benitez was regretting that decision at the interval as Paolo Maldini’s first-minute opener was added to by two Hernan Crespo goals.

Benitez was writing his half-time speech when his side conceded a third.

At the start of the second period, Liverpool made a substitution with Hamann replacing Steve Finnan. Benitez also changed to a 3-5-2 formation. And the rest, as they say, is history…

Watch the video above as Carra and Rafa dissect Liverpool’s miraculous shootout victory over AC Milan in Istanbul.