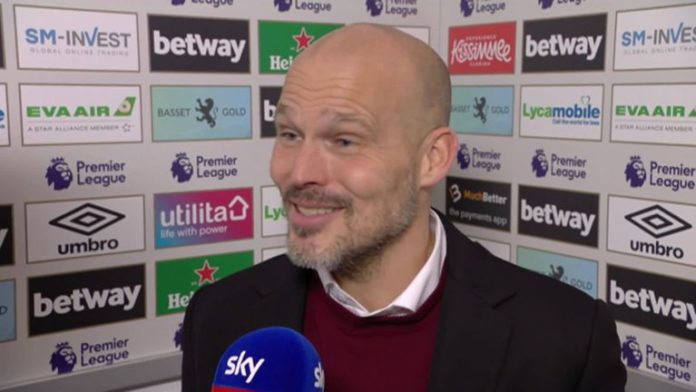 Freddie Ljungberg enjoyed his first victory as Arsenal interim head coach – and admitted his players were feeling “low” prior to their stirring comeback at West Ham.

Three goals in the space of nine second-half minutes saw Arsenal win in the Premier League for the first time since October courtesy of a 3-1 triumph at the London Stadium.

The result ended Arsenal’s nine-game winless run in the competition – the longest stretch without a league victory since early 1977 – but Ljungberg reserved all the credit for his players.

He told Sky Sports: “I don’t think any of us can really imagine [how hard it has been]. They’ve been low but you could see in the dressing room how relieved they are. We’ve still got a lot to work to do. We’ll enjoy tonight and return to work tomorrow.

“It means so much for the players and I’m delighted for them. They’ve been playing under immense pressure. I could feel West Ham getting tired and our passing was getting crisper. We sliced through them and the result is amazing.

“Football throws a curve ball at you all the time and the players responded. They worked so hard, and in the Premier League you have to. It’s all down to the players – I’m just there to guide them a little bit.”

After a 2-1 defeat at home to Brighton last time out, Ljungberg was brave and made four changes – later five after Hector Bellerin suffered an injury in the warm-up – with Gabriel Martinelli handed a first Premier League start.

Record-signing Nicolas Pepe was also included from the off – and the Ivory Coast forward repaid Ljungberg’s faith with arguably his best performance in an Arsenal shirt.

“Nicolas is an amazing footballer, but it’s not easy to come from the French league,” Ljungberg added. “He was really tired at the end and worked his socks off. He’ll get better and better.

“We had a similar style in the second half as we did in the first but it was a lot slower. Of course, it’s a great feeling and it’s a lot nicer feeling to win than to lose but we won’t get carried away.”

Pellegrini: We have to play for 90 minutes

The spotlight is back on Manuel Pellegrini after overseeing a third straight home defeat for West Ham in the Premier League for the first time since August 2015.

The Hammers are now just one point above the relegation zone, but Pellegrini is adamant that he is the right man to arrest the slide.

He told Sky Sports: “It’s difficult to understand as we dominated the game for 60 minutes but then we didn’t score the important second goal and we lost the game.

“We must understand the boos because in the last five games we didn’t win. They hadn’t produced much for 60 minutes, but if you don’t win the fans aren’t going to be happy.

“There’s a lot of different reasons to analyse but you can’t concede three goals at home in every game. We are not in our best moment but we have to keep fighting. Of course, I can fix it. We have to play for 90 minutes, not for 60.

“I cannot think of one Arsenal chance in those opening 60 minutes. It doesn’t depend on me [if I am the person to fix it].”

‘Pellegrini has one big problem’

“There’s been a lot of talk of clubs in the Premier League changing their manager, and some of them already have. I think the result at Chelsea was huge.

“But to then lose in the midweek [against Wolves] and then lose another home game, against an Arsenal team who are not at their best, this was a great opportunity.

“Arsenal’s away record is really poor, they go 1-0 up, but they fell apart and it’s a really bad night for West Ham. I don’t really like changing managers in the middle of a season.

“I can only understand it when there’s the fear of relegation and they take a chance that it changes something.

“That’s Manuel Pellegrini’s big problem, as they’re very close to that relegation zone. If he’s in charge against Southampton next weekend, and they lose that one, that’s massive.”