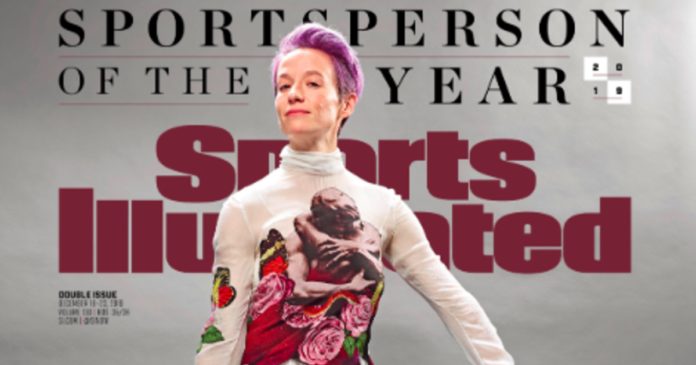 It has been quite the year for soccer superstar Megan Rapinoe — she helped lead the U.S. Women’s National Team to a fourth World Cup championship, publicly advocated for pay equal to the U.S. Men’s National Team and even took on the President of the United States. On Monday, 2019 got even better for the athlete, as Sports Illustrated named her their 2019 sportsperson of the year.

“She owned the biggest moment of her life and silenced all the doubters, all while becoming a voice for so many across the world,” Sports Illustrated tweeted on Monday. The magazine also shared the cover of the issue, featuring Rapinoe standing with a sledgehammer and a defiant expression on her face.

“Honored to win @SInow #Sportsperson of the Year!” the USWNT co-captain tweeted Monday. “I couldn’t have done it without the fans. This award is for all of you.”

Rapinoe led Team USA to their fourth World Cup title —  their second in as many tournaments — in July when they defeated the Netherlands in the championship match. She scored six goals in the tournament earning her the Golden Boot, given to the top goalscorer, and the Golden Ball, awarded to the best overall player in the tournament. She also nabbed the women’s Ballon d’Or –– the prize given to soccer’s best player of the year earlier this month.

Rapinoe is also a vocal advocate for social issues — speaking out about LGBTQ rights and equal pay for women. She has been a critic of the Trump administration, emphasizing that she would not accept a visit to the White House if her team won the title.

She was also one of the early supporters of former San Francisco 49ers quarterback Colin Kaepernick, kneeling during the National Anthem at several Major League Soccer games until the U.S. Soccer Federation adopted a policy that required players to “stand and honor” the flag.

While 2019 may have been a jam-packed year for the athlete, 2020 looks to be just as significant. She scored a book deal with Penguin this past summer and the currently untitled book is scheduled to be published in the fall of 2020.

Air Quality is Worse in African American Neighborhoods. This Community is...

ILM Gives Behind-the-Scenes Look at Production of The Mandalorian