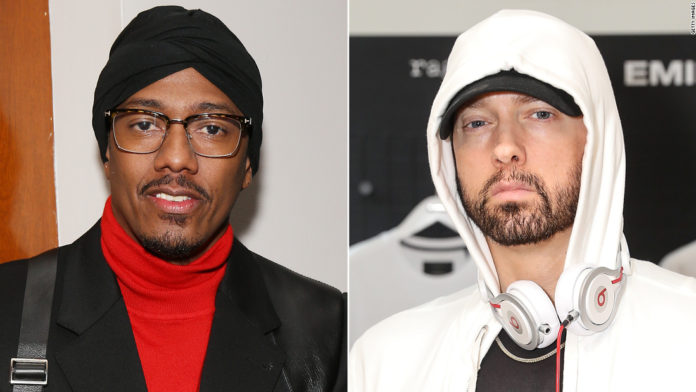 Cannon, who is currently hosting “The Masked Singer,” dropped a diss track Monday aimed at the rapper.
Titled “The Invitation,” the song opens with phoned-in vocals from Knight who is currently imprisoned after being sentenced last year to 28 years in the death of a man during a hit-and-run incident on the set of the movie “Straight Outta Compton.”
“I know you don’t never do no talking, but Nick is family,” Knight says on the track.
Cannon is also joined by battle rappers Hitman Holla, Charlie Clips and Prince Eazy for what is essentially a call out for Eminem to face the “Black Squad.”
Cannon and the Detroit rapper have been on beefing terms since 2002 after Eminem claimed he had been romantically involved with superstar singer Mariah Carey — a claim she has consistently denied
Carey and Cannon were married from 2008 to 2016 and are the parents of twins.
Eminem dragged Carey on songs over the years and Cannon got involved in 2009 after Eminem released “Bagpipes from Baghdad” on which he took a swipe at the couple.

The two men have sparred back and forth since then and recently Eminem reignited the feud with a guest spot on the Fat Joe/Dre single “Lord Above.”
Cannon then went on his Los Angeles Power 106 FM morning radio show program to call the Detroit rapper old and challenged him to come on Cannon’s MTV show “Wild ‘N Out” where comics engage in diss battles against each other.
In “The Invitation” Cannon again calls Eminem out and makes some salacious allegations about Eminem and his chauffeur. Slim Shady responded Monday night by tweeting to Cannon to “Stop lying” and noting that he’s never employed a chauffeur.
“I demand an apology Nicholas, you’ve made my gardener so jealous,” Eminem tweeted. Cannon countered with a video on his Instagram account in which he urged the rapper (using his legal name Marshall) to “Come out and play.”
“@Eminem I see your handlers let you use the internet today,” the caption on the video read. “Marshall! @mtvwildnout We waiting…”
For the record, the inclusion of Knight is significant because it harkens back to yet another hip hop beef as the imprisoned former mogul has bad blood with Eminem’s mentor, Dr. Dre, who was formerly a partner of Knight’s on the Death Row Records label.