Home Culture Lizzo twerked in a thong at a Lakers game and it was... 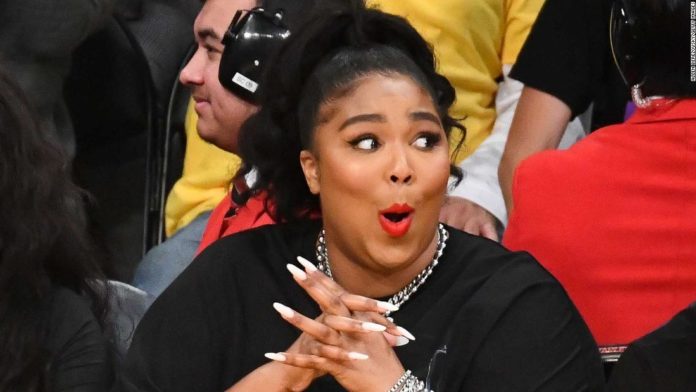 The zaftig 31-year-old singer attended the Los Angles Lakers matchup with the Minnesota Timberwolves on Sunday and sparked some controversy because of her choice of outfits.
Her black T-shirt dress was demure from the front, but a party in the back with cut-outs which displayed her thong and fishnet stockings.
Folks got a better view — and on the Jumbotron no less — when Lizzo twerked during the Laker Girls’ performance to her song “Juice.”
Keep in mind that it ain’t Lizzo’s fault that she’s out here getting loose, but her mini performance was further evidence that everything she does is bigger than her.
By showing the world what she’s working with, Lizzo sparked a debate over what is appropriate attire in public and whether she was more harshly judged because of her size.
“This is not about Lizzo being fat, twerking, or hating on her,” one person tweeted. “This is about her seeking attention, coming into an arena with kids and family dressed inappropriately.”
Still others praised the singer for her daring.
“If you have to preface your criticism of Lizzo with, “it’s not because she’s fat and Black,” chances are you feel small type of way about fat Black women,” one tweet read. “And I’mma just leave it there.”
Several people brought up outfits such as Rihanna’s sheer dress which left her breasts and thong visible at the 2014 CFDA Fashion Awards as an example of how a thinner artist is seemingly allowed to be more provocative in their attire.
For her part Lizzo took to Instagram Live to say folks who don’t like a certain part of her body can “kiss it.”
“This is who I’ve always been. Now everyone’s looking at it and your criticism can just remain your criticism,” she said. “Your criticism has no effect on me, negative criticism has no stake in my life, no control over my life, over my emotions.”