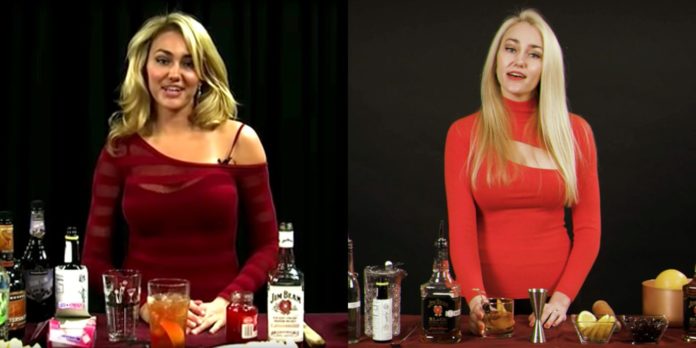 The world’s worst Old Fashioned was made on a quiet summer morning in 2010, in a dot com startup’s shoddily decorated conference room in Santa Monica. Mahalo.com had hired JaNee Nyberg to host a series of 50 cocktail tutorial videos that they would then upload to their YouTube channel. In the series’ most infamous video, the actress, model, and part-time bartender slops together an Old Fashioned using no bitters, a giant orange wedge, a ton of ice, and an entire pint glass of bourbon. Now, everyone makes an Old Fashioned a little bit differently—here’s Esquire’s official recipe—but Nyberg’s way was definitely wrong and totally hilarious.

“The first time I saw the viral video was six or seven years ago. I was taken aback by just how much Jim Beam was being used,” says Beth Burrows, who was a bartender in Louisville back then.

Mahalo.com’s video has gone viral several times over the last decade (most recently, earlier this year), but no one had heard from Nyberg herself since. That was, until I tracked down the Sacramento resident in late October of this year for a “Where Is She Now?” piece I wrote for drinks website PUNCH. In our interview, she told me that she actually knows how to make cocktails and that the godawful Old Fashioned wasn’t really her fault—she was given incorrect bartending tools, no on-set instructions, an inept film crew, and a complete lack of shooting time.

My article also went viral—people seriously can’t get enough of JaNee—which made Jim Beam think it was finally time for Nyberg to get some Old Fashioned redemption.

“When [the PUNCH] article came out, providing more context and background on the making of the video, the story resonated with a lot of people around me,” says Burrows, who is now Jim Beam’s Kentucky Bourbon Ambassador. “So many of us have walked into situations where we’ve barely had the tools needed to complete the task at hand and are told to wing it. She deserves the chance to press the do-over on that infamous video and showcase her true cocktail skills.”

But, would Nyberg even want to? She hasn’t been “behind the stick” as a professional bartender in years. Today, she lives a quieter life; she’s a happily married mom and a successful AP history teacher (who just won her entire school’s Teacher of the Year award, no less).

“It was as if they thought those videos were made with my genuine bartending skills and as though I would actually drink what I made.”

“For the past 10 years, I have had numerous journalists and random fans call me about the videos—but usually in a negative light,” Nyberg says. Bars in Los Angeles and New York consistently offered her guest bartending gigs too, but always as a comic sideshow. “So much of the feedback was without real basis as to who I was. It was as if they thought those videos were made with my genuine bartending skills and as though I would actually drink what I made.”

But, the outpouring of positive comments on my follow-up story finally gave her some peace, and she decided it was time to again get behind the bar. Shot over Thanksgiving week in Chicago, in this new Jim Beam commercial exclusively available on Esquire, Nyberg proves she always had it. She’s got a jigger and a full bitters bottle this time, and she swapped Jim Beam White for Jim Beam Black, an older bourbon and better Old Fashioned choice. How many ounces of it does she use, however? Well…you’ll have to watch the video to see that.

iPad 2020 rumors: The iPad could get a backlit scissor-switch Smart Keyboard

Huckberry Is Having a Massive Sale on Men’s Outerwear Today