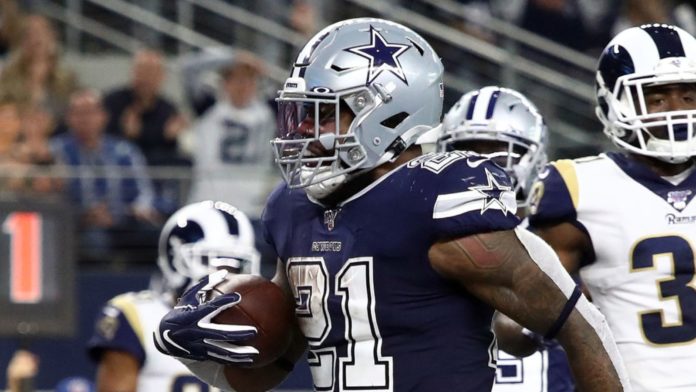 The Dallas Cowboys made a statement Sunday, ending a three-game losing streak with an impressive 44-21 victory over the visiting Los Angeles Rams.

Notching their first victory of the season against a team with a winning record, the Cowboys (7-7) are tied for first place in the NFC East with the Philadelphia Eagles, who they face next week on the road – Dallas would clinch the division and a playoff spot with victory.

The game also featured a big-time performance from an inconsistent Dallas defense, which held the Rams to just three rushing yards in the first half and 22 yards total by the end of the game, though Todd Gurley did get into the endzone twice, registering a rushing and receiving TD.

Jared Goff threw for 284 yards and two touchdowns, but also had an interception late in the first half, setting up a Dallas touchdown that saw the hosts head into the break with a 28-7 lead.

The final two minutes of the first half was where the Cowboys took complete control of the game, thanks to two quick-fire Elliott rushing TDs. Elliott first scored from a yard out soon after the two-minute warning and then added a three-yard score with 16 seconds remaining after Goff was picked off by linebacker Sean Lee.

Dallas had taken a 7-0 lead in the first quarter on Prescott’s 19-yard touchdown pass to Jason Witten, who made a great one-handed catch. The Rams answered with a two-yard TD pass from Goff to Gurley to tie the score, but the Cowboys took the lead for good when Prescott hit former Ram Tavon Austin for a 59-yard scoring strike.

Following Elliott’s scoring burst to end the first half, new Cowboys kicker Kai Forbath made three second-half field goals of 50, 42 and 42 yards as Dallas set a season high for points.

In garbage time, Gurley and Cooper Kupp both found the endzone for the Rams either side of Pollard’s long touchdown run, but a Dallas win was never in doubt.

As well as snapping their own three-game losing streak, the Cowboys also ended L.A’s two-game winning run. The Rams (8-6) are now two games behind the Minnesota Vikings for the NFC’s second and final Wild Card spot with two games remaining.

Both teams are on the road next weekend, with the Cowboys in Philadelphia before a home clash against the Washington Redskins to close the regular season, while the Rams travel to San Francisco to face the 49ers before ending at home against the Arizona Cardinals.

Coronavirus ‘spread getting stronger’ as number of deaths rise to 81