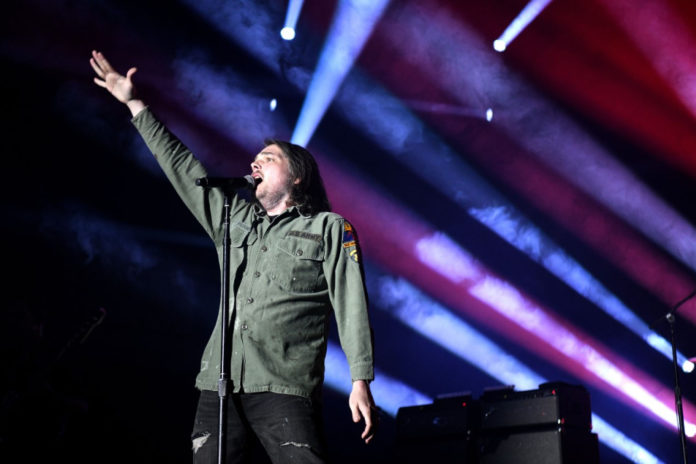 On the eve of the My Chemical Romance reunion concert, it’s 48 degrees Fahrenheit, or the coldest Los Angeles ever really gets. But outside the Shrine Expo, where the band will stage their first concert together in seven years, several young fans are huddled behind the merch trailers, hoping to catch a glimpse of their heroes as they presumably leave soundcheck. Mabel, a blue-haired 22-year-old from São Paulo, says she spent all her airline miles to fly here from Brazil.

“[My Chemical Romance] are the real saviors of the broken,” she says, quoting lyrics from their 2006 number “Welcome to the Black Parade,” by far their most memorable hit. “It’s music that broken kids can relate to, so they can feel like part of something. They totally saved my life and every day I am so glad for it.”

An hour before, the band did just that — well, sort of. “Do you have a blanket?” says vocalist Gerard Way to Mabel in her now-viral video, which also shows bassist Mikey Way, plus guitarists Ray Toro and Frank Iero, personally handing out plush, MCR-branded blankets to diehard fans. Most recognizable by their signature black hoodies and artfully smudged eyeliner, the global fanbase known as the MCRmy is among rock music’s most steadfast group of devotees. Telling by the tender blanket scene — and the fact that their reunion show sold out in under four minutes — My Chemical Romance has certainly earned them all.

Founded in the wake of the September 11th attacks, the Newark-born band played somewhat of an anomaly in New Jersey’s then-burgeoning pop-punk and emo scene. Taking a page from the horror punk legacy of Lodi, NJ legends the Misfits, My Chemical Romance accented their apocalyptic post-hardcore with Gerard’s theatrical, banshee-on-Broadway delivery in their first album, I Brought You My Bullets, You Brought Me Your Love.

They crested with their 2004 major label debut and instant emo classic, Three Cheers for Sweet Revenge, and continued their ascent with their 2006 rock opera concept record, The Black Parade. The band seemed to start the decade off strong with their 2010 LP, Danger Days: The True Lives of the Fabulous Killjoys. Yet by 2013 they called it quits, citing interest in other artistic pursuits. Gerard told NME in 2016: “The end of Black Parade felt like a very natural end. To go beyond that felt like betraying some sort of artistic command that I had within myself.”

Still, their 2013 disbandment had apparently garnered them even more fans; in Los Angeles, roughly three-quarters of the room raise their hands to indicate that it’s their first-ever MCR show. Yet before the band does the honors, they hark back to their roots by introducing fellow Jersey boys and comrades in discontent, the band Thursday, as their opening act. After blazing through hit songs like “Understanding In a Car Crash” and “Signals Over the Air,” frontman Geoff Rickly beckons Saves the Day‘s Chris Conley to join him in a harmonious duet of the Buzzcocks’ “Ever Fallen In Love?” By the time MCR takes the stage, so culminates New Jersey Emo’s Holy Trinity.

As the band remains shrouded behind an enormous curtain, rumblings of the opening dialogue from 2004’s “I’m Not Okay (I Promise)” already sends the audience spiraling. “You can’t swim, you can’t dance and you don’t know karate! Face it, you’re never gonna make it,” shout along members of the MCRmy’s Sweet Revenge generation. “I don’t wanna make it,” says Gerard in the clip. “I just wanna —” the curtain drops, and the band charges into a full-on punk rock blitz. If this band excels at anything beyond their riffs, it’s their matchless flair for drama.

Hundreds of fans of various genders and races don their best Gerard cosplay, emulating the sharp-dressed, androgyne glam rocker they best remember from the Black Parade era. Gerard, however, opts for an understated, earthy look in green army shirt and jeans — but he belts his heart out all the same. During “Thank You For the Venom,” he even gives his back pockets a couple of cheeky pats. We decide we like laid-back, down-home Gerard, but he returns to his crawly, vampiric persona in “House of Wolves.” “We! Are ready! To punish you!” he shrieks from center stage.

Youth Code’s Sara Taylor sprints into the foreground to join the band in their swing dance punk number, “You Know What They Do to Guys Like Us in Prison.” And during “Mama,” parents smirk wryly at each other from the sidelines as Gerard sings: “Mama, we all go to hell/I’m writing this letter and wishing you well/Mama, we all go to hell!” (Co-writer Liza Minnelli is nowhere to be found at the Shrine — but instead, probably curled up at home with a good book and a glass of Chianti.)

The band dials it back to the 20th century in their Bon Jovi-meets-Mott the Hoople power ballads, like “S/C/A/R/E/C/R/O/W” and “Famous Last Words”; and during the encore, they nearly let the fans take the wheel during theater kid emo bangers like “Helena” and “Welcome to the Black Parade.” Sure, their fans may be the broken, beaten, and damned — but they can certainly carry a tune:

Though the 2010s saw dozens of emo band reunions bubble up and dissipate, it’s with this landmark concert that MCR ceases to be a nostalgic act, and proves its mettle as a timeless, rock and roll band for the ages. The band has five more appearances slated for 2020, exclusively in Australia, New Zealand and Japan; as for fans in the States, so long, and good night for now.