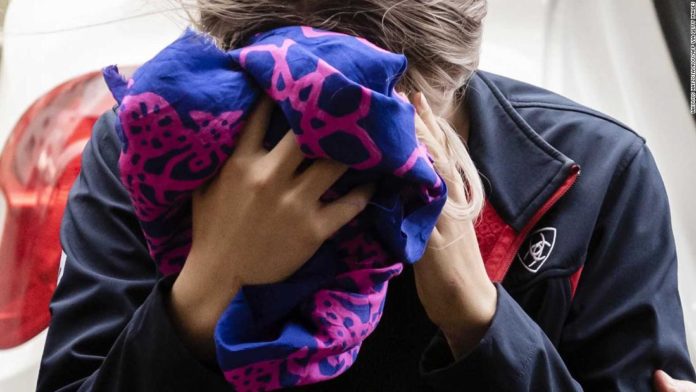 The 19-year-old, who cannot be named for legal reasons, had said she was attacked by 12 Israeli youths on July 17 at the Pambos Napa Rocks hotel in the resort of Ayia Napa, where she was staying.
But 10 days later she retracted her statement and police arrested her. She was found guilty of causing public mischief on Monday and now faces up to a year in jail.
“The UK is seriously concerned about the fair trial guarantees in this deeply distressing case and we will be raising the issue with the Cypriot authorities,” the UK’s Foreign and Commonwealth Office said in a statement.
The woman spent more than a month in prison before being granted bail. Her passport has been held to prevent her leaving the country.
The woman’s lawyer, Michael Polak, earlier told CNN his client had been pressured into retracting her allegations, and that she was initially denied legal representation.
“She wasn’t allowed a lawyer, which is against European law, she didn’t have a translator, she was suffering from PTSD,” he said.
In court, the woman insisted that she was raped but had been pressured into changing her account by Cypriot police, Reuters reported.
The woman told the court that she had had a consensual relationship with one of the youths, and was in a room with him when the others appeared, Reuters said. She alleged that she was held down and raped.
Judge Michalis Papathanasiou, however, accepted the prosecution’s case that the woman fabricated the claims because she felt “ashamed” after finding out some of the Israelis had filmed her having sex on their mobile phones, Reuters reported.
None of the youths was called to give evidence. The judge refused to allow any evidence about whether the woman was raped, her lawyers said.
Following the UK’s foreign office statement Tuesday a Cypriot government spokesperson said Cyprus was “an orderly state” with “constitutionally established institutions and separation of powers.”
“The Government does not intervene in cases brought before the competent Courts of the Republic of Cyprus, nor does it comment on positions or allegations which are raised with respect to cases still pending before the Courts,” the spokesperson said in a statement.
“The Government has full confidence in the Justice system and the Courts of the Republic of Cyprus, which should be left unfettered to implement state laws and deliver justice.”
Nir Yaslovitzh, a lawyer representing the young Israelis, applauded the court’s decision and said he sought an appropriate punishment on “the girl, who refuses to this day to take responsibility for the horrible act she has done against the boys.”
He added that a civil process would take place to compensate his clients.
Rights activists say the case has been mishandled by Cypriot officials. On Monday, protesters from the Network Against Violence Against Women gathered outside the Famagusta District Court, many wearing white scarves portraying lips sewn together.
Sentencing has been adjourned until January 7.
Polak said the woman would be appealing the case to the Cyprus Supreme Court and, should this fail, to the European Court of Human Rights.