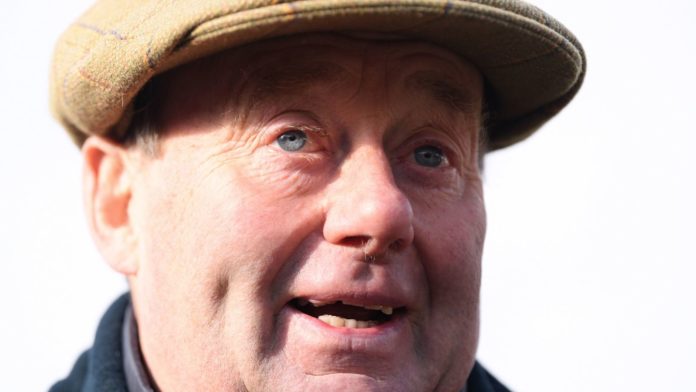 Champ will defend his unbeaten record over fences on a quality card at Cheltenham on New Year’s Day.

Named after the 20-time champion jockey Sir Anthony McCoy, Nicky Henderson’s charge has largely lived up to his tall reputation so far – winning eight of 11 career starts, including two Grade Ones over hurdles.

He has won each of his two starts over fences, both at Newbury – doing well to get the better of Black Op in Grade Two company most recently despite not always convincing in the jumping department and almost running out passing the elbow.

Frank Berry, racing manager to Champ’s owner JP McManus, said: “We’re looking forward to running him. Nicky thinks he is in good form, so we’ll see how we go.

“It looks a hot enough race, but we’re hoping for the best.”

Champ’s Grade Two penalty means he must concede 5lb to each of his five rivals in the Paddy Power Broken Resolutions Already Dipper Novices’ Chase.

His biggest threat on ratings is the Sue Smith-trained Midnight Shadow, who is winless after three starts over the larger obstacles but ran his best race so far when narrowly beaten by Keeper Hill on his latest appearance at Haydock.

Grade Two honours are also up for grabs in the Dornan Engineering Relkeel Hurdle, for which the likely favourite is Henderson’s Janika – who reverts to hurdles after winning the Haldon Gold Cup at Exeter and finishing fourth in the Tingle Creek at Sandown.

The Seven Barrows handler also saddles William Henry; Paul Nicholls is represented by Quel Destin, and Dan Skelton’s Roksana returns to the scene of her victory in the Mares’ Hurdle at last season’s Festival.

Skelton’s assistant Tom Messenger said: “She was a bit disappointing in the Coral Hurdle at Ascot last time, but maybe we ran her back a bit too quick after her first run of the season at Aintree.

“It’s a competitive and open race, and she has a chance. I think she’s a mare who comes to herself in the spring.”

Tom George gives 2018 Supreme Novices’ Hurdle hero Summerville Boy a confidence-boosting outing back over timber after his heavy fall in the Henry VIII Novices’ Chase at Sandown, while Emitom makes his belated return for Warren Greatrex.

The latter won his first five races before chasing home Champ in the Sefton Novices’ Hurdle at Aintree in early April.

“He worked nicely at Newbury recently and has schooled since, when he jumped really well, so it is all systems go,” said Greatrex.

“New Year’s Day looks a good starting point. It is his first run out of novice company, and he will have to step up. But his form looks good, and we think he has improved.”

Harry Cobden will partner Quel Destin, and believes the move up to an extended two and a half miles will suit after a lacklustre effort in the Greatwood Handicap Hurdle in November.

“I think he definitely wants this sort of trip – and I think he is a big price,” said Nicholls’ stable jockey.

“It was hard work for him in the Greatwood, because he had loads of weight – and although I’m not very good with statistics, I don’t think many four-year-olds would have won that off top weight or run well with it.

“At the time, our horses were running a bit in and out – some were running well and some weren’t. He looks in good form, going into this race.”

Might Bite runs over hurdles for the first time in almost four years, in the Paddy Power 69 Sleeps To Cheltenham Handicap Hurdle.

Henderson’s enigmatic gelding has established himself as a top-class staying chaser – with four Grade One victories, including success in the 2017 King George VI Chase – before finishing second to Native River in an epic renewal of the Cheltenham Gold Cup in 2018.

However, he endured a torrid campaign last season and then unseated Nico de Boinville on his return at Aintree last month – prompting Henderson to switch him back to hurdles on the day he officially becomes an 11-year-old.