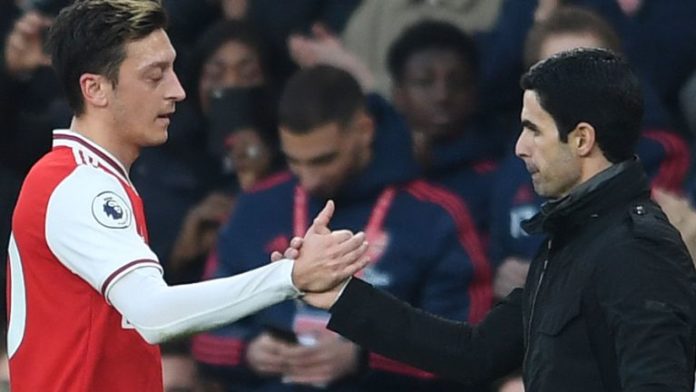 New Arsenal boss Mikel Arteta has suggested he is looking to build the team’s structure in way to get the best from Mesut Ozil.

The Germany forward’s future in North London has looked bleak for some time, having often been overlooked by former boss Unai Emery.

But Ozil put in a blistering performance in Arteta’s side on Sunday despite defeat at home to Chelsea, leaving the field to a standing ovation, and Arteta appeared to reject that Ozil cannot cut it in a high-tempo team.

“That is what I am hoping, that he can sustain that level for every three or four days,” Arteta said. “He is putting everything he has to try to do that.

“I think his numbers physically have improved so much as well and he is willing. That is what I can tell you – every day I see [that] in training.

“I know him really well so I am not surprised. I know the ability [he has], the player we have there. Also, the structure has to help him for him to be able to [use] everything that he has.”

However, Arteta conceded the World Cup-winning Ozil cannot shoulder all the expectation himself if Arsenal are to arrest their worrying slide, as they begin 2020 sitting the Premier League’s bottom half.

Arteta said: “On his own he cannot do it. He needs the collective structure, organisation and his team-mates. Nowadays there are only one or two players in the world that can do something on their own.

“He needs help and the team to play in a certain way to facilitate and take his strengths more and more every time in the games. That is what we are trying to do.”

Asked whether that meant he would look to build the team around Ozil, Arteta replied: “No, I put him in the team if I see every day that his attitude, desire, understanding of what we are trying to do is there and he has the will.

“And if he is in a better moment than somebody else I will pick him. At the moment that this changes then he will not play.”