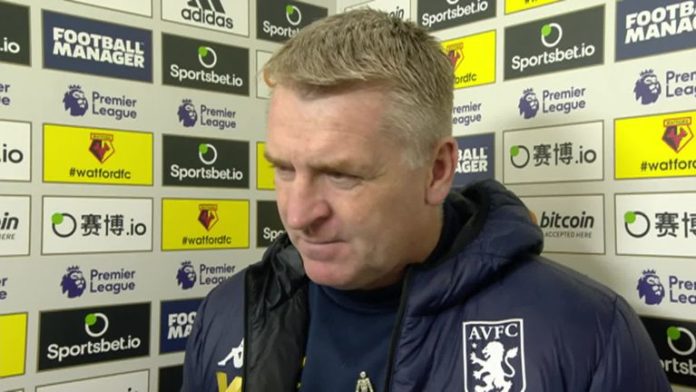 Aston Villa boss Dean Smith has refused to accept his team are in a “crisis” after the 3-0 defeat to relegation rivals Watford on Saturday.

Villa were promoted from the Sky Bet Championship this summer and spent £144.5m on players – the second highest in the division – but find themselves in the Premier League bottom three heading into 2020.

They travel to Turf Moor on Wednesday having picked up fewer points on the road than any other side in the Premier League this season – four from a possible 30 – and have won just once in seven top-flight games.

“There won’t be a crisis meeting,” Smith said.

“A crisis is when you’re down to 12 players [in your squad] and you’re getting beat seven or eight nil every week.

“The fact is that we’re not performing in the highest league at the moment. It’s a tough league to play in.”

When quizzed about Villa’s summer spending, Smith added: “That’s the route we wanted to go down. We wanted to buy players with potential. At the moment, some of them need to live up to that potential.”

Smith feels that his players are lacking in confidence and played down his side’s misfortunes, believing that a positive result and performance against Burnley can inspire his squad.

“The result [against Watford] is certainly a blow but football can turn around very quickly,” he said.

“If you go to Burnley and get a result, all of a sudden it can change very quickly. [But] it will be tough. They are hard to beat there, and they know what they need to do to get points in this league.

“The players have to believe in their hype and in their potential. I’ve felt that some are lacking in confidence.”