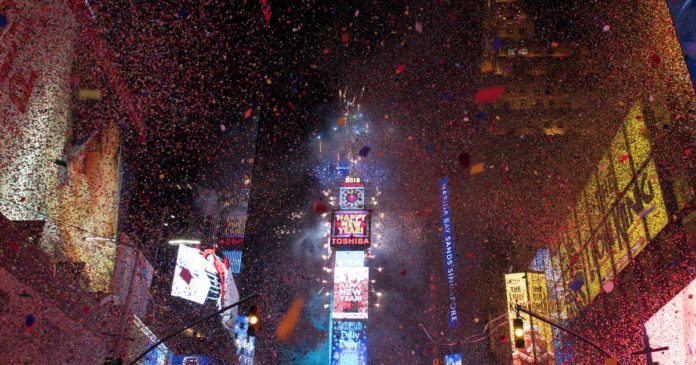 The glittering New Year’s Eve ball will drop at midnight to ring in the new year. The ball has become a symbol of the year to come — but few know the history and the details surrounding the shining icon.

The 11,875 pound ball is covered with 2,688 Waterford crystal triangles of varying sizes and lengths, according to a fact sheet from Times Square’s official website. For 2020, 192 new crystals were added to the orb, which feature three pineapples to signify the traditional image of hospitality and goodwill. This year’s theme for the ball is “Gift of Goodwill.”

The ball is illuminated by 32,256 LED lights and is capable of shining in over 16 million different colors, according to the fact sheet.

The first ball dropped in 1907

While partiers rang in the new year in Times Square as early as 1904, the first ball appeared in 1907, according to Times Square’s official website. The ball descended from the flagpole atop One Times Square — and the rest is history.

The ball has been lowered every year since 1907, except for 1942 and 1943. The annual festivities were suspended due to the wartime “dimout” of lights in the city, according to the site. Despite the lack of a sparkling ball, revelers still gathered in Times Square during those years to welcome the New Year with a minute of silence and the ringing of chimes from sound trucks.

Seven different versions of the ball have been designed so far, with the most recent iteration unveiled in 2008 and dubbed the “Big Ball,” according to the fact sheet.

The ball stays up all year

Over a million people are expected to pack into New York’s Times Square on New Year’s Eve to ring in 2020. They and millions more television viewers will be waiting to get a peek at the iconic orb as it descends at 11:59 p.m. But those who miss out on the celebration aren’t out of luck — the ball is now a year-round attraction in Times Square, glimmering in full public view from January through December, according to Times Square’s official website.

What: Join CBSN for a special New Year’s Eve show with a live look at New York City’s Times Square during the countdown to 2020.
Date: December 31, 2019
Time: 11 p.m. ET
Location: New York City
Online stream: Live on CBSN and on your mobile or streaming device
On TV: Watch other New Year’s Eve coverage on fuboTV (get a free trial)
Follow: New Year’s celebrations around the world live blog