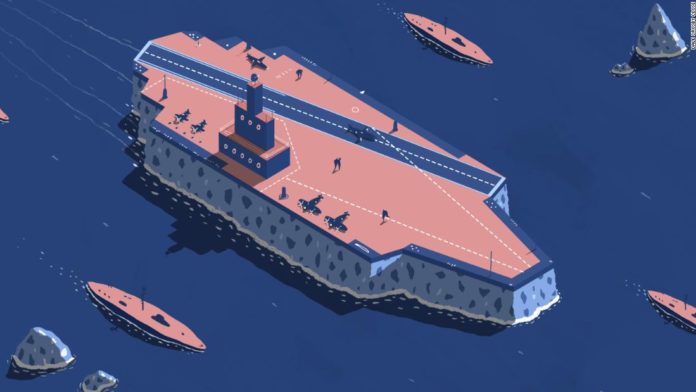 The dark depths of Lake Patricia in Canada still hide a secret that was once poised to change the course of World War II.

To gain the upper hand against the deadly German U-boats, the British had come up with a strange idea: make aircraft carriers out of giant icebergs. They were, after all, abundant, completely free and believed to be unsinkable. Crazy as it sounded, the project was approved by British prime minister Winston Churchill himself.

A prototype was built and tested at the lake over four months — and parts of it remain there, 50 feet below the surface. The ice has long melted, but Project Habbakuk still lives.

In 1942, at a branch of the British War Office, an eccentric scientist named Geoffrey Pyke was trying to figure out how to protect Allied ships in the “U-boat alley,” an area of the Atlantic Ocean where Nazi submarines, out of the range of Allied warplanes, ruled the day. With building materials like steel in short supply, he thought, why not take a chunk of ice from the Arctic and tow it south to land planes on it?

German U-boats being chased off the US coast in 1942. Credit: Keystone/Hulton Archive/Getty Images

“Pyke was a sort of holdover from the last Victorian boffins, someone we’d never take seriously now because he didn’t have multiple degrees. But he did have credibility,” Susan Langley, a professor at St. Mary’s College of Maryland who’s done doctoral research on the subject, said in a phone interview.
At the time, ice was considered almost indestructible: the International Ice Patrol, established to destroy icebergs after one had sunk the Titanic in 1912, had reported that blowing them up wasn’t easy, even with torpedoes and incendiary bombs.

“Pyke thought ice was the new strategic material that would win the war,” Langley said. “And Churchill was willing to entertain the idea.”

He decided to call the ambitious design HMS Habbakuk, a misspelling of the name of prophet Habakkuk, who, in the Old Testament, wrote: “…be utterly amazed, for I am going to do something in your days that you would not believe, even if you were told.”

The largest warship ever

Building a warship out of ice was just as hard as it sounds. “One problem was that if you wanted to launch aircraft off of something, it had to have 50 feet of freeboard above the water, but because icebergs are 90% submerged, that meant having almost 500 feet below the water,” said Langley.

Such a vessel would be almost impossible to move. Also, when the tip of an iceberg melts, it makes it turn and roll, which would be a problem with aircraft trying to refuel on it. Finally, a flight deck of some other material was required for planes to land and take off.

“So they decided to have a hull of ice, but build it like a conventional ship, which meant it had to be kept frozen through some kind of refrigeration system.”

The proposed warship would be the largest ever built: 2,000 feet long and 200 feet wide — more than twice as big as the Titanic — with a weight of over 2 million tons and enough space for 300 aircraft. It would sail the seas at a speed of 7 knots (8 miles per hour) and withstand waves of 50 feet, giving Churchill his secret weapon against the U-boats.

He approved the project on Dec. 4, 1942 with a memo that was classified as “Most secret,” and asked for a prototype to be built.

Britain now needed ice, so it turned to Canada for help. The experiment was assigned to the National Research Council, and the man in charge, C.J. MacKenzie, called the design “another of those mad wild schemes.”

He chose Lake Patricia in the Jasper National Park in Alberta as the test site due to the availability of an ironic source of free labor nearby: a camp of conscientious objectors. “They were never told what it was. They called it ‘Noah’s Ark.’ They knew it was something for the war effort, but they didn’t know what exactly,” said Langley.

In early 1943, a 60-foot long prototype vessel was built with walls and floors of wood, tar, refrigeration pipes and a massive chunk of ice from the lake. “It was like a big shoe box, with a giant ice cube in the middle and the refrigeration piping running around it like a rib cage. Frozen into the middle of the ice was a smaller rectangle, where the refrigeration unit was,” said Langley.

A roof was put on top of the structure to protect it from the elements and disguise it as a boat house.

It worked, but it wasn’t all smooth sailing. Some of the piping arrived damaged, so water couldn’t be used for the cooling system and air was pumped through instead. There were doubts about the strength of the ice and the viability of the structure itself; although a better building material called “pykrete” (from Pyke and concrete) was developed around this time by adding wood pulp to the ice mix, it wasn’t used in the prototype, and manufacturing it in the huge quantities needed for the Habbakuk seemed impractical.

The test had shown that the ice ship wasn’t pure fantasy. But by mid-1943, the project started to sink.

Its demise was a combination of three factors, according to Langley. First, Iceland could be used as a permanent base in the North Atlantic, which negated the need for floating aerodromes. Second, newer planes that could patrol for longer were introduced. And finally, the development of the centimetric radar helped track U-boats more accurately. The war was starting to turn in favor of the Allies.

“Those three things made it obsolete before it even reached fruition,” said Langley. “It was viable, but not at the scale that Churchill wanted and as quickly as he wanted. It was feasible to build the structure, but impractical to actually implement it.”

In June 1943, all testing in Canada was stopped and Churchill was informed.

Once the project was abandoned, the refrigeration machinery was removed and the model was just left there, before subsiding into the lake. Although most people in the area had a rough idea of what had been going on, some mystique started to grow around it.

Langley, who’s also an underwater archeologist, overheard a conversation in 1982 about “an airplane made of ice” that was still in Lake Patricia. “I thought that was impossible, but I wanted to find out more.”

So in 1984 she dived down to have a look. “Good thing I had no idea what I was looking for, or I don’t know what I would have thought, probably that a barge full of heating ducts or something had sunk. It was interesting, so I started getting grants to go back.”

Langley summarized her research and multiple dives to the wreckage in a Ph.D dissertation, and is also writing a book. Her work has contributed to the rise of a small influx of divers visiting the area to see for themselves.

The wreckage sits on a diagonal, with the deepest corner at the 100-foot depth. It’s not the easiest of dives, because the lake is at a 4000-foot altitude in the Rockies, so there’s an increased risk of decompression sickness. Visibility is low and it’s fairly dark all the time, not to mention an algae bloom in the summer. To help identify the wreckage, an underwater commemorative plaque was installed in 1988 in its proximity.

“It’s at the shallowest corner, so if you can dive to 85 feet, which is what most divers can do, you can go and have a look at it.”

It might be wise to hurry up, though, because not much is left.

“It’s in terrible shape now, almost completely collapsed,” said Langley. “It’s not sexy. Part of that is time, part is gravity, part is that it’s been loved to death, because it’s unusual and people love this story.”