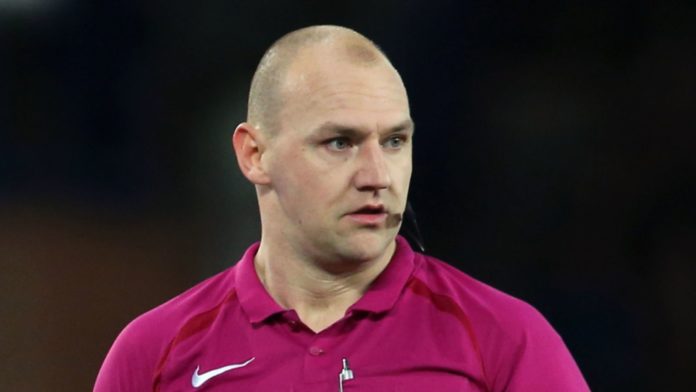 Former Premier League referee Bobby Madley has revealed he was sacked for filming a video in which he appeared to mock a disabled person.

Madley ceased officiating at the highest level in England in August 2018, with the refereeing body Professional Game Match Officials Limited saying only that he was relocating due to “a change in personal circumstances”.

But in a blog post on New Year’s Eve, Madley said he was actually dismissed for “gross misconduct on grounds of discrimination”.

“I’m not proud of myself,” Madley said.

“I have to live with this for the rest of my life. It destroyed my career, my reputation and caused immeasurable damage to my family life.”

Madley did move to Norway, where his partner is from, but only after he was sacked for sending a video to someone he “trusted” which apparently mocked a disabled person ahead of his daughter’s sports day.

He said he took the video as a response to ribbing about a parents’ race he had not participated in and being “fat shamed” in a national newspaper.

“As I sat in my car with my phone in hand, a person walked past my car in front of me who had a walking impairment,” he wrote. “The next part I am ashamed of. I took a six-second film, I said nothing. I did this in Snapchat, which is where I take all of my films that I intend to save to my phone.”

In the video, Madley said that he “had a chance of winning the parents race this year”.

“Out of context I accept this reads shamefully. I accept that. However, my intention was that the joke was aimed at myself,” he added.

Madley claimed the recipient of the video sent it to his employers and a disciplinary hearing resulted in his immediate dismissal.

“Had I have sent this to anyone on Snapchat, then I would accept the decision that later came as a result,” he said. “I didn’t do that, though. I saved it to my phone. I sent it as a private text to somebody who I trusted. Somebody who understood the context of previous sports day comments and was aware of the fat shaming I had received.

“I regret taking the video, I regret sending that video and, whilst it was a dark-humoured joke, it was just that. A joke. It was not intended to shame anyone, it was not intended to be seen by anyone other than the person I sent it privately to in a text message on my own personal phone.”

Madley, 34, was one of the 18 full-time professional referees and officiated 91 matches in the Premier League between 2013 and 2018.

“I started refereeing at 16, my career was over at 32,” he said. “I had my dream job, a well-paid and incredibly enjoyable job that I loved every single minute of.”

He said he is now aiming to help young referees where possible.

“I stand proud on there to support the fight against racism and to support all within the LGBT community both inside and outside of football,” he said.

“I am far from a discriminatory person and yet that is what I am labelled as when you Google my name. That hurts.

“The last 18 months have been mental torture for me and but for those close friends and family around me, as well as a strong partner, I dread to think what could have become.

“I still struggle to sleep, I still suffer mentally day-to-day to try to find the person I am now rather than clinging to the person I once was.”