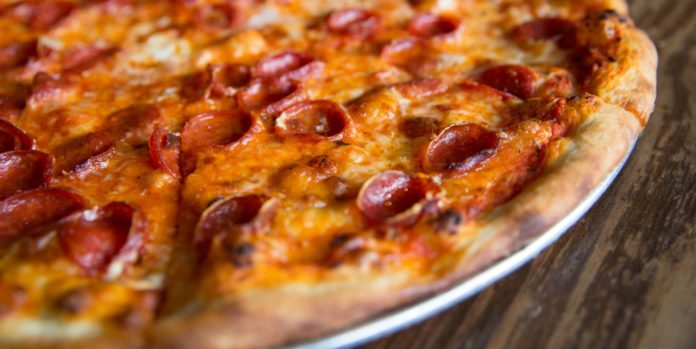 It’s been a year since I said goodbye to you. Your cheesy delights, your garlic-dusted edges. I gave you up for a full 365 days, and to be frank, it was a terrible year. I don’t mean that in the hyperbolic way that lovers do when they’re finally reunited. I mean that it was a Bad Year™, and after all this time, I guess I’m just one pizza-hungry Andrew Lincoln, standing outside your door with several sheets of poster board that reveal my Dominos order. But like Andrew, I know now that I can walk away.

Over the year, I attended way more pizza parties than you’d think you’d ever come across as an adult. Seriously, people love you, you delicious muse. Hell, I went to an actual pizza wedding, where I saw you across the room, piping hot and waiting for me. But I turned my head away, mostly because the wedding was in England, and can you even imagine if the one time we reunited was when I was drunk and you were English? Banish the thought. But in all those parties and weddings and other moments of temptation, I resisted. I’ve learned that I can live in this world without you. I just don’t want to.

A year ago, I wanted to find a “better me,” so I put distance between us, blaming my shortcomings on a hand-tossed crust that had never asked for anything more than my presence. I’d turn to you in the face of any problem, and then I’d blame you for the consequences. When I had a bad day? Pizza. When I got into an argument with my boyfriend? Pizza. But when you weren’t there, the problems didn’t go away. In the wake of your absence, I gained 15 pounds and nursed bad days with chicken wings or French fries or wine. I realized the problem in our relationship had always been me. I could blame that seared cheese topping, the crisp of a pepperoni, all day long. But the operative word there is “blame.” That’s a tough place to be in—looking at your considerably less-defined jawline in the mirror and knowing it’s that way because of, well, your own actions. To quote Billie Eilish, “I’m the bad guy. Duh.”

A year ago, I looked to you as the cause of hardships I wasn’t willing to face. I cast my best friend—nay, my lover—aside because it was easier to blame you than it was to recognize that I funnel other issues into the things I love. Pizza nor fries nor wine can fix any problem that isn’t hunger or sobriety. They sure as hell can’t fix a bad day. And for all of 2019, I imagined that if something happened to me…if I weren’t on this earth anymore…the last memory I’d have of you was from so long ago. A break-up made in haste, after a life spent loving you so wholeheartedly.

A break-up made in haste, after a life spent loving you so wholeheartedly.

Maybe this year apart was worth it, because I learned that to love you—truly love you—is to not take advantage of you. To have pizza in my life is to also be able to recognize the days when it shouldn’t be there, days when I would have previously used pizza as a band-aid for a bigger problem. On those days, perhaps it’s worth looking inward and asking if I’m inviting you in because of our mutual love, or just because I need your presence to distract from something else, like work anxiety or the release of a subpar Taylor Swift album. Maybe I can find other ways to re-channel that stress, like running or vegetables. Just kidding, vegetables are gross.

I hope you’re not mad at me. If you’ll have me, I’d love for us to meet up again. Because as tempting as it is to turn to you in times of stress, I also know that some of my favorite moments were spent with you. Remember all those nights watching The Bachelor? You loved The Bachelor! Monday evenings filled with crazy white people choosing each other for high-end dates and then explaining away how they were there for the “right reasons.” On those nights, we were the ones there for the right reasons. Just one man, one pizza, mutually respecting each other’s saltiness.

I would like for us to try that now. The long-lost 2004 country band Lonestar said it best: Let’s be us again. Life is too short to give up the things you love, yet too long to abuse them. I’ll see you whenever you’re ready, with a bit of hot sauce on the side.