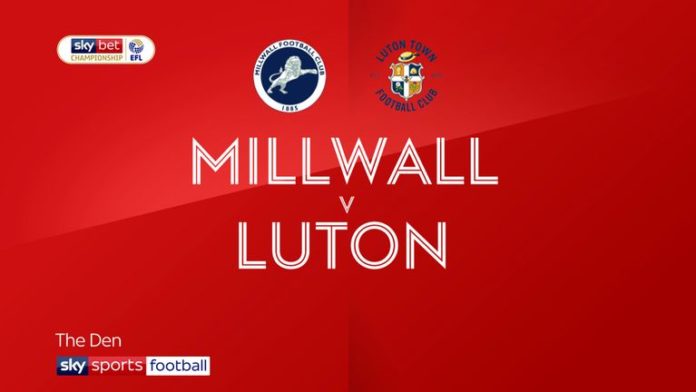 Millwall enjoyed the perfect start to the new year by coming from a goal down to beat Luton 3-1 and boost their play-off chances.

Luton took the lead just before half-time when Sonny Bradley punished slack marking inside the Millwall penalty area to head in unchallenged from Alan Sheehan’s free-kick.

The home side were much improved after the break, though, and levelled through Tom Bradshaw’s close-range header on 69 minutes, before Connor Mahoney put them in front with a fine solo goal (78).

Matt Smith then made it three Millwall goals in 12 minutes when he headed in Mahoney’s cross at the back post to secure a well-deserved three points for Gary Rowett’s side.

Graeme Jones showed in-form Millwall plenty of respect by emulating their 5-2-3 formation at kick-off and it paid off as Luton deservedly took the lead through Bradley’s unmarked header after 41 minutes.

Immediately after Luton had taken the lead, Rowett opted to change his formation to a 4-2-3-1 by bringing on a striker for a defender, with Bradshaw replacing Alex Pearce, and it proved to be an inspired move.

Smith, who dominated his aerial duels against Luton’s defenders all afternoon, almost drew Millwall level on the hour mark when he headed against the crossbar, before he and Jake Cooper made a mess of converting an open goal at the far post moments later.

Eventually, Millwall levelled with a well-worked move on the right-wing. Wallace’s deep cross to the far post was met by Smith, who cushioned a header into the path of Bradshaw to nod in from inside the six-yard box.

Rowett turned to his bench again straight after that goal by introducing Mahoney for Aiden O’Brien and the winger did not take long to fire his side in front, unleashing an unstoppable low shot into the corner after being picked out by Wallace’s cross-field pass.

Just three minutes later, Millwall scored their third through the tireless Smith who was on hand to apply the finishing touches to a pinpoint delivery from Mahoney on the left wing.

Man of the match – Jed Wallace

Smith was an absolute colossus in attack for Millwall, winning a mammoth 12 aerial duels throughout the 90 minutes and the big target man thoroughly deserved his late goal.

However, the star of the show was Jed Wallace who continued his fine form this season with an inspired performance. It was he who drove Millwall on in the second half, playing a key role in their first and second goals.

Wallace’s assist for Mahoney means he has had a hand in 16 Championship goals this season (nine goals, seven assists) and Millwall will be desperate to keep him beyond the end of the transfer window.

Both teams are in FA Cup action next weekend with Millwall hosting League Two side Newport County and Luton Town travelling to the Vitality Stadium to face Bournemouth.