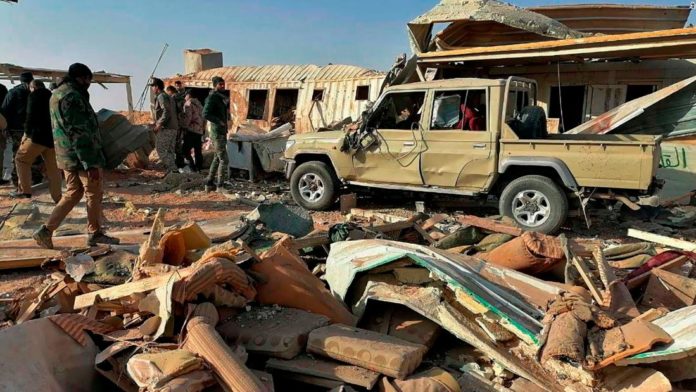 It’s a struggle that dates back to the overthrow of Saddam Hussein in 2003 and the emergence of a Shia-dominated state in Iraq. But in light of the Trump administration’s campaign of maximum economic pressure against Iran, it has reached a new and potentially dangerous pitch.
The President himself Tuesday accused Iran of “orchestrating an attack on the U.S. Embassy,” and the White House said he would decide “how and when we respond to their escalation.”
The protests followed US airstrikes on Friday against a pro-Iranian militia in Iraq — Kata’b Hezbollah — that the US holds responsible for rocket attacks against US facilities in Iraq. More than twenty members of the militia were reported killed. The ability of the protestors to breach the outer walls of the embassy compound and set fires suggests a degree of acquiescence on the part of Iraqi security forces.
Trump tweeted: “We expect Iraq to use its forces to protect the Embassy, and so notified!”
The Iraqi government is certainly angry at the US strikes, which have added one more crisis to its overflowing in-tray of problems. Prime Minister Adel Abdul Mahdi declared three days of mourning for the victims of the airstrikes, which he described as outrageous.
The US now has very few political allies in Iraq, and the embassy and other US facilities in Iraq have become the epicenter of a proxy struggle between Washington and Tehran. Kataib Hezbollah is threatening to lay siege to the embassy following Tuesday’s protests and its supporters were joined by those of other pro-Iranian militia, which are beyond the Iraqi government’s control.
Richard Haas, President of the Council on Foreign Relations, tweeted that the “Iran-orchestrated violence” that erupted in Baghdad is “a response to US eco[nomic] warfare.”
President Trump, Haas added, “needs to be ready to go to war w[ith] Iran or provide a diplomatic off-ramp, linking partial sanctions relief to Iran’s regional, nuclear, domestic actions.”
As positions harden, the latter course seems less and less likely.
Caught in the middle, Iraq is at risk of becoming a failing state. It’s already wracked by popular protest, crippled by political paralysis and threatened by renewed terrorism.
Roiling popular protests since October have pitted young Iraqis fed up with corruption and the lack of opportunity against the security forces and militia like Kataib who are accused of some of the harshest actions against demonstrators.
At least 485 people have been killed since protests erupted and at least 27,000 people have been injured, according to the Independent High Commission for Human Rights of Iraq.
The unrest has further weakened an already fragile economy and has triggered a political meltdown. Prime Minister Mahdi resigned last month but no consensus candidate has yet emerged to replace him. Two constitutional deadlines to nominate a successor have come and gone.
In many places, the protests have taken on an anti-Iranian flavor, with the Iranian consulate in the city of Najaf torched last month.
Iraqi President Barham Salih, a Kurd, last week threatened to quit “to avoid more bloodshed and in order to safeguard civil peace” rather than approve a candidate for Prime Minister seen as pro-Iranian. Thousands of protestors, who are demanding fresh elections and an end to the domination of existing political blocs, took to the streets in support of Salih’s stand.
In short, the Iraqi political elite is utterly discredited, which makes it even less capable of handling the growing proxy confrontation between Tehran and Washington.
Iran has invested heavily in deepening its influence in an arc from Iraq through Syria to Lebanon and will not give up its strategic gains without a fight, even as US sanctions make its expansionism difficult to afford.
The airstrikes will embolden the pro-Iranian blocs in parliament to push again for the expulsion of US forces from Iraq.
But the last time US forces left, at the end of 2011, ISIS took full advantage. Its remnants may now be savouring a new opportunity. They have been regrouping underground in provinces north of Baghdad and have carried out a stream of ambushes, bomb attacks and assassinations in the latter half of this year.
A proxy war between US forces and pro-Iranian groups that are notionally tied into the Iraqi military would make counter-terrorism operations — the very reason the US still has 5,000 troops in Iraq –more difficult.
In November the senior US military commander in the region, Gen. Kenneth McKenzie, said Iran was trying to “crack the campaign” of US sanctions through attacks designed to provoke an American military response. If that’s the case, Tehran may have succeeded.
This analysis was updated throughout in the wake of Tuesday’s protests in Baghdad.