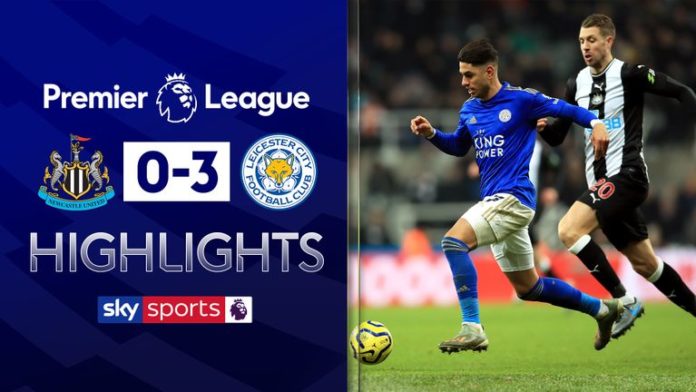 Leicester cruised to a 3-0 win over Newcastle at St James’ Park after the hosts were forced to play most of the second half with 10 men due to injuries.

Newcastle sat deep early on and allowed the visitors, who had a staggering 77 per cent possession, to pass along their defensive lines. But former Magpies forward Ayoze Perez capitalised on a loose pass from Florian Lejeune in the 36th minute to open the scoring.

Two goals down, Steve Bruce’s woes were compounded with three quickfire injuries to Jetro Willems, Javier Manquillo and Jonjo Shelvey, resulting in all three substitutes being used by half-time.

Fabian Schar then pulled up with a hamstring injury just five minutes into the second half and Newcastle were down to 10 men, although they did not concede again until the 87th minute when substitute Hamza Choudhury hit a stunning third for the Foxes.

Newcastle failed to engage as Leicester dominated possession early on in their defensive and middle thirds, maintaining defensive banks to prevent space for the Foxes’ customary fast breaks into space.

But that game plan was shattered when Lejeune made a poor pass across his own penalty area for Perez to intercept, and he found the back of the net as he tumbled from a Schar’s desperate lunge.

Having only started three league games this season, Lejeune produced another hospital ball minutes later into the path of a ruthless Perez, with Maddison completing the turnover by despatching past Dubravka in emphatic fashion.

The four injuries that followed quashed any chance of a Newcastle recovery, but still Leicester struggled to carve clear-cut chances in front of goal and Steve Bruce’s side may well have hung on without the costly errors and a more clinical edge.

The Magpies should have been ahead on 25 minutes after Jonjo Shelvey launched a pass over Leicester’s defence, but Joelinton looked sluggish waiting to shoot, allowing Caglar Soyuncu to intervene and his shot bounced off Kasper Schmeichel.

The loss comes after back-to-back defeats against Manchester United and Everton and now marks a clear dip after a sustained period of form going into the festive period – but the four injuries could prove far more costly than the result.

Premier League managers from Jose Mourinho to Pep Guardiola have been queuing up to criticise the packed festive fixture schedule recently and there was more evidence of why on New Year’s Day as a string of players from clubs up and down the table succumbed to injury.

Newcastle were the worst hit, but they were not the only ones affected and, with many Premier League sides already coping with long absentee lists, the debate over the festive fixture schedule is sure to intensify following the third round of Premier League games in just six days.

The Premier League have introduced a February winter break this season, which will take place across two weekends, but that is little comfort to sides already decimated by fatigue-related injuries. Leicester boss Brendan Rodgers summed up the views of his counterparts last week. “It’s ‘Let’s pretend to have a break’,” he said. “It’s disappointing to say the least.”

Man of the match – Ayoze Perez

Perez ran the show against his former club, pouncing on both of Lejeune’s errors for the game-changing goals, to score the opener and assist Maddison and creating a match-topping four chances.

Youri Tielemans also produced a dazzling display, while Christian Fuchs, Wilfred Ndidi, Soyuncu and Maddison all worked tirelessly to control the game and ensure three points against a side hit by injuries.

Newcastle travel to Rochdale in the third round of the FA Cup on Saturday before facing Wolves at Molineux the following weekend.

Leicester have a hectic week ahead, hosting Wigan in the FA Cup in three days’ time, facing Aston Villa in the first leg of the Carabao Cup semi-final at the King Power on Wednesday and facing Southampton on home soil next weekend.