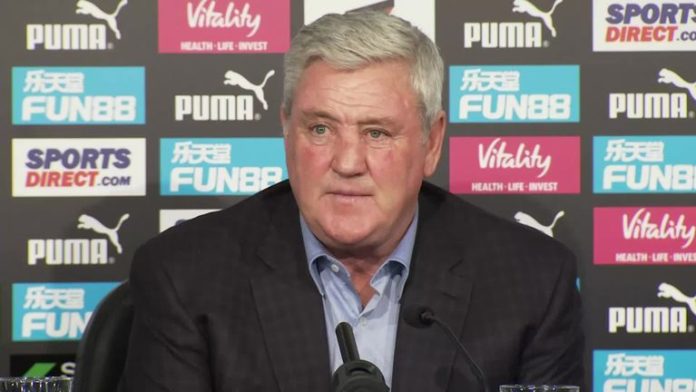 Newcastle manager Steve Bruce has branded the Premier League festive fixture schedule as “ludicrous” after his side suffered five injuries and were forced to play with 10 men in a 3-0 defeat against Leicester.

Bruce lost full-backs Jetro Willems and Javier Manquillo during the first half, while Jonjo Shelvey was replaced at half-time as the Newcastle head coach made all three substitutes before the start of the second half.

To make matters worse, Newcastle also lost Fabian Schar early in the second half to what appeared to be a hamstring injury, forcing them to play out the final 39 minutes with 10 men.

Deandre Yedlin, who replaced Willems, also broke his hand but managed to finish the game.

“I’ve been involved in the game for 40 years but I’ve not seen anything like that,” Bruce said following the defeat. “We lost four players in 20 minutes and gifted them two goals.

“You get injuries by forcing players to play tired. That’s not an excuse, it’s a fact. I was concerned before the match, I made that clear,” he added.

“I said it a month ago that to ask players to play four games in 10 days is ludicrous. Today is the consequence.”

Newcastle travel to Rochdale in the third round of the FA Cup on Saturday before having to cobble a side from an injury-ravaged squad to face Wolves at Molineux the following weekend.

“Premier League managers from Jose Mourinho to Pep Guardiola have been queuing up to criticise the packed festive fixture schedule recently and there was plenty more evidence of why on New Year’s Day as a string of players from clubs up and down the table succumbed to injury.

“Kane was the most high-profile, suffering a suspected hamstring problem on his fifth start in 17 days, but Tottenham were not the only ones affected and, with many Premier League sides already having to cope with long absentee lists, the debate over the schedule is sure to intensify following the third round of fixtures in just six days.

“The Premier League have introduced a February winter break this season, which will take place across two weekends, but it is little comfort to the sides already decimated by fatigue-related injuries. Leicester boss Brendan Rodgers summed up the views of his counterparts last week. “It’s ‘Let’s pretend to have a break’,” he said. “It’s disappointing to say the least.”