Home Sport Wright: You should never give up 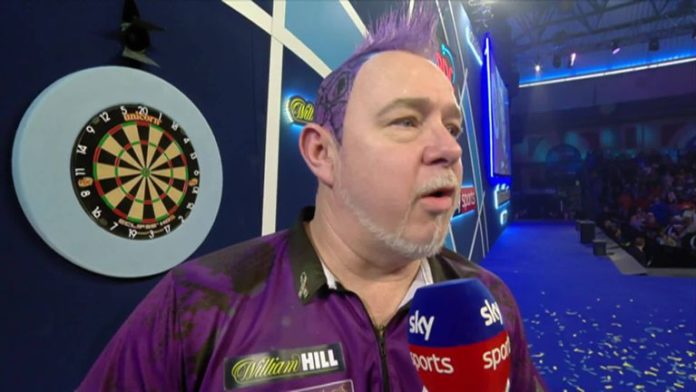 Peter Wright fought back the tears and said “you should never give up” after his PDC World Championship final win over Michael van Gerwen.

Snakebite had lost ten ‘premier’ televised finals in his career – many of which came in agonising circumstances and after missed match darts.

But the 49-year-old Scotsman’s 7-3 final win over Michael van Gerwen was the culmination of years of hard work.

“You should never give up – it doesn’t matter how many times you get beaten,” he said on Sky Sports Darts.

“I used to get beaten by Phil Taylor, Gary Anderson all the time, then Gezzy Price, all these good players keep coming through. I’m thinking, ‘all these players keep getting in my way!’

Wright has joined an elite club of just nine players who have won the PDC World Championship. “That sounds amazing, doesn’t it?” he said. “That’s got a nice ring to it.”

Wright missed match darts in previous deciders and was praying for his arrows to find the D10 bed in the final leg.

“I couldn’t believe the first one didn’t go in! Or the second one,” he said.

Snakebite was quick to acknowledge the efforts of his opponent, against whom he had lost seven major finals in the past.

“Sorry to Michael. The chances I used to give to Michael, he gave me them,” he conceded.

“Michael is a fantastic player.”

As the interview concluded, Wright’s entrance song Don’t Stop The Party was blasted around the Ally Pally and he danced his way across the stage.