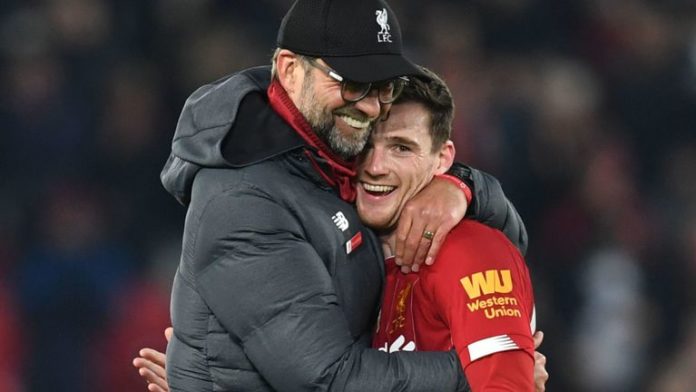 Jurgen Klopp: “You don’t fear losing in the situation we are in but you still know it is possible.”

Liverpool manager Jurgen Klopp insists he is not scared of losing but the quest to improve means he occasionally “kills the mood” in his post-match debrief to players.

If the Reds avoid defeat against Sheffield United at Anfield on Thursday they will have gone 12 months without losing a league match and former Arsenal manager Arsene Wenger recently compared them to his ‘Invincibles’ side of the 2003-04 season.

Liverpool have won 17 consecutive league games at Anfield since Leicester came from behind to draw last January, their joint second-best such run at home in their history, and are unbeaten in 50 home league matches stretching back to April 2017.

“You don’t fear losing in the situation we are in but you still know it is possible – it is one of three possible results. You win it, you draw, or you lose,” said Klopp.

“I am constantly really concerned about different things. It’s not that I want to be – I’d like an easy life but I don’t have it.

“I constantly try to make sure of increasing the probability to win a football game and there’s always the other team there.

“I am not sure what Arsene Wenger thought back in the days when they were the ‘Invincibles’, if he knew before the game they would win anyway.

“It’s not like this for me unfortunately, it would be really cool if I knew it before the game. But I can only say we don’t fear losing, I never did, it is a possibility but I don’t fear it.

“I try to create as many solutions as possible to win the game, sometimes it works out, sometimes not.”

Last time out at Anfield, Liverpool beat Wolves 1-0 thanks to a favourable VAR decision ruling out the visitors’ equaliser for a marginal offside decision.

The level of the performance was understandable, considering the number of matches Klopp’s side have played and the travel they have to contend with – they had just returned from a trip to Qatar where they were crowned Club World Cup winners.

Afterwards, the players spoke of not being satisfied with the display and Klopp also knew they could be a lot better.

“I don’t know exactly what the boys said after but we were not happy with all parts of the game,” he added.

“We were happy with the result, but the game gave us a lot of space for improvement, you don’t have to be a super football brain to see that.

“I told the boys what I thought we should have done better immediately after the game and maybe that killed the winning mood.

“I was really happy about the result but we have to work on performances. We never did it and should not start lying to ourselves like everything is fine when it’s not because we have to make sure that we improve. We will do, 100 per cent.”