Home Sport Sensational Hammers get Moyes off the mark 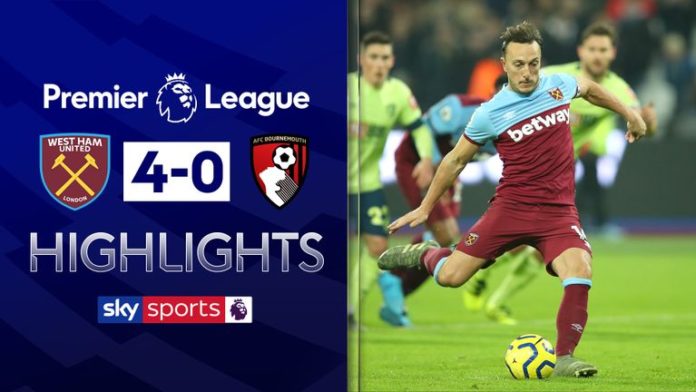 David Moyes’ West Ham return began in perfect fashion as his side rose out of the relegation zone with a 4-0 win over Bournemouth.

A confident Hammers performance got off to a fine start when Mark Noble’s sidefoot from 20 yards was deflected past Aaron Ramsdale by the unfortunate Lewis Cook.

With his first half of football back at the London Stadium still not over, Moyes’ boys had a third when Noble went down under light pressure from Harry Wilson and stepped up to bury the soft penalty awarded by Graham Scott.

Felipe Anderson added a morale-boosting fourth after the break when taking Declan Rice’s wonderful crossfield pass in his stride and beating Ramsdale, before an ugly challenge from Aaron Cresswell saw him sent off by Scott, only for VAR to overrule the official and award him a yellow instead.

Man of the match: Mark Noble

The Hammers could have added to their lead but the eye-catching result left Moyes celebrating after lifting West Ham up to 16th, while a dreadful Bournemouth performance leaves them rooted inside the relegation zone for the first time this season.

Moyes may not have been every West Ham fan’s first choice to replace Manuel Pellegrini but on the back of a turbulent week for the club, and teetering inside the relegation zone against the side directly above them, all the new manager would have asked for was three points from his first game back in the dugout.

And after a brief spell of pressure from Bournemouth in the opening 10 minutes, as the Hammers’ nerves got the better of them, they quickly settled and soon took advantage of a flurry of possession around the visitors’ box when Robert Snodgrass’ pull-back was turned home by Noble, albeit thanks to a deflection off Cook which wrongfooted Lukasz Fabianski.

Bournemouth, with plenty of problems of their own given their recent run of form, then collapsed. Even so, they could do little to stop a wonderful second from Haller, who rose to connect with Fredericks’ excellent cross and buried it in the far corner before Steve Cook could get anywhere near him.

The Hammers were home and hosed with 10 minutes remaining of the half when Noble went down in the area after feeling a nudge in the back from Wilson, and while the decision to award a penalty was soft, VAR was unlikely to overturn Scott’s original decision. Noble then buried the spot kick from 12 yards.

A double change at the interval from Eddie Howe, who had looked shellshocked on the sidelines at his side’s performance, did nothing to stem the tide.

West Ham could have added to their lead several times before Anderson scored his third chance in quick succession. A wonderful first touch from Rice’s pass took him past Simon Francis, before he rolled the ball under the onrushing Ramsdale inside the box.

Both sides made four changes from their last matches.

A moment of controversy followed which would have had far more impact had the game not already been as good as over, with Cresswell shown a straight red for a studs-up, high challenge on Lewis Cook which left him in serious pain – but VAR official Lee Mason then overturned the decision and downgraded the card to yellow.

It would make little difference as the game fizzled out with that long VAR stoppage disrupting the hosts’ rhythm, as they picked up a first win on home soil since beating Manchester United on September 22, while Bournemouth have now lost eight of their last 10 Premier League games.

David Moyes: “I don’t think we could have had a better start. I’d love to take all the credit, but I think the players have to do that. We’ve had a day and a bit with them, but their attitude, commitment and I felt like if we could give the supporters back something and get the crowd behind them, they did.

“Mark was incredible today, I thought him and Declan were excellent. A few people have said to me that Declan hasn’t been playing as well as he can recently, but I thought he was excellent today, the two of them played really well. Mark Noble epitomises everything that goes on really, and his performance was really good.

“There’s so many players with the technical ability, Felipe Anderson, Pablo Fornals, Seb Haller, Manuel Lanzini, we want to get them all in the team but we want to play football to get ourselves out of the position we are in. As soon as we get high enough up the table to use them all at different times we will, but at the moment we need to intersperse them.”

Man of the match – Mark Noble

Mr West Ham came up trumps with a wonderful performance in front of goal and across the pitch, leading by example with the armband on surely one of his best days as a West Ham player, certainly in recent history.

Only Rice and Pablo Fornals covered more ground for West Ham than the Hammers skipper, who made as many interceptions (two) as anyone else on the pitch, the most passes in the opposition half and in the West Ham engine room conceded only one foul.