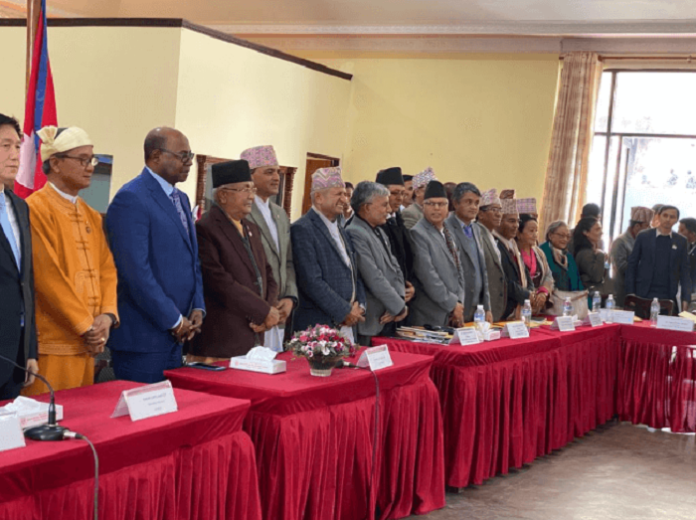 The mission of the centre is to carry out policy-relevant research and analysis on destination preparedness, management and recovery from disruptions that impact tourism and threaten economies.

It will also play a role in training officials to respond to crises as they evolve as well as developing communication capacities.

The organisation currently has offices in Kenya and Jamaica.

Nepal prime minister, Khadga Prasad Sharma Oli, was also on hand, presenting Bartlett with a token of his appreciation for the work he has done in global resilience.

Addressing the opening of the centre, Bartlett said: “Similar to the Caribbean, Asia-Pacific is described as one of the most disaster-prone regions in the world with its extensive coastlines, low-lying territories, mountainous terrains and many small island states.

“The geographical characteristics of the region make it highly vulnerable to rising sea levels and extreme weather variations.

“Nepal, in particular, has been singled out as the fourth most at-risk country to climate change impacts in the 2018-2035 Climate Change Vulnerability Index.

“In recent times, the county has experienced many adverse environmental changes that have been linked to climate change and global warming.”

The tourism sector in Nepal is also considered at risk.

The sector is one of the largest industries in the country, and contributed US$0.8 billion to the economy in 2017, equivalent to four per cent of total gross domestic product.

The growing sector is, however, increasingly under direct and indirect threat from climate change.

In 2015, Nepal was struck by a devastating earthquake that resulted in almost 9,000 fatalities.

Bartlett continued: “The Nepal Tourism Board has been positioning the country as a global centre for tourism resilience in Asia.

“In June, Kathmandu hosted the first Asian Resilience Summit which was jointly organised by the Global Travel & Tourism Resilience Council and the Nepal Tourism Board.

“The summit was designed to review successful policies in Nepal which have led to the stabilisation and growth of the travel sector since the 2015 earthquake.

“In hindsight, Nepal must be credited for responding in a timely and affirmative manner to the urgent climate-related challenges that are confronting the country’s future.

“The rest of the world should take note.

“In recognition of the country’s stellar efforts to build tourism resilience as well as to commemorate the launch of the Visit Nepal Campaign 2020, I am extremely honoured that Nepal has been chosen as the location for the establishment of the next satellite Global Tourism Resilience & Crisis Management Centre which I am confident will successfully build on the recovery and resilience efforts that the country has made so far.”

The centre is designed to serve as a focal point to support the efforts of Asian destinations to enhance destination preparedness and to manage as well as to recover from disruptions and crises that impact tourism and threaten economies and livelihoods in the region.