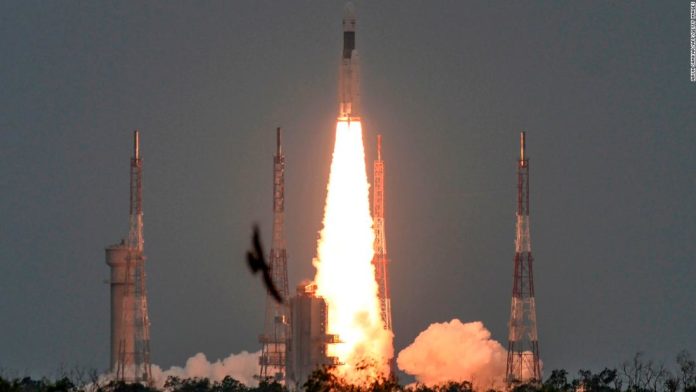 At a news conference Wednesday, Indian Space Research Organization (ISRO) chairman K. Sivan said that the government has approved a third lunar mission. The mission, named Chandrayaan-3 — which means “moon vehicle” in Sanskrit — will include a new propulsion module, moon lander and rover, Sivan said.
The new equipment would cost around $35 million, with its launcher costing a further $51 million, an ISRO spokesman told CNN Business.
If successful, India will become only the fourth country to make a soft landing on the moon, after the United States, the former Soviet Union and China. India’s first lunar mission was in 2008, when it crashed an impact probe into the moon in a controlled landing — but a soft landing is a far greater technical challenge.
Wednesday’s announcement comes only months after India’s failed Chandrayaan-2 moon landing mission, which had set out to collect mineral and chemical samples.
The spacecraft entered lunar orbit in August, but as it slowly made its way toward the lunar surface in September, it lost communication with India’s space agency.
NASA announced that Vikram — the Chandrayaan-2 mission’s lander — had a “hard landing,” and its location is still unknown.
Indian Prime Minister Narendra Modi, who championed the mission, later consoled the ISRO team in a televised address.
“We will look back at the journey and effort with great satisfaction,” Modi said. “The learnings from today will make us stronger and better. There will be a new dawn and a brighter tomorrow very soon.”
The lunar landing attempts form part of India’s big space ambitions. The country wants to become a major space player, and put Indian astronauts in space by 2022.
On Wednesday, Sivan said the agency was making “good progress” toward its first human space flight mission, and had already selected four astronauts for extensive training.
Over the past decade, India has made a number of other steps toward achieving its space ambitions.
In 2014, India became the first Asian nation to reach Mars, when it put the Mangalyaan probe into orbit around the red planet. In 2017, India launched a record 104 satellites in one mission. And last year, Modi announced that India had shot down one of its own satellites, in what it claimed was an anti-satellite test — making it one of four countries to have achieved that feat.
Notably, all of this has been achieved on a relatively low budget. The 2014 Mars Orbiter Mission famously cost $74 million — less than the $100 million spent making the Hollywood space thriller “Gravity.”
“India doing this at a low cost is important because there has been some criticism over why India has been doing these missions to space when there are other areas to focus on,” freelance space journalist Jonathan O’Callaghan told CNN last year. “I think it’s important for the country to do these missions on a relatively low budget to provide inspirations and aspiration for the general public.”
— CNN’s Swati Gupta and Manveena Suri contributed to this report.