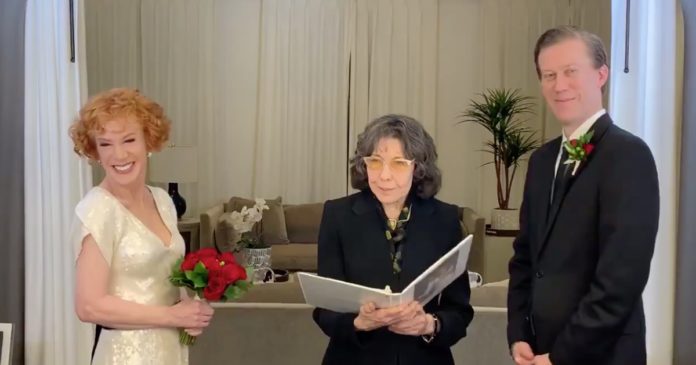 “Happy New Year. And – surprise – we’re getting married,” the couple said in unison in a video posted on Twitter on December 31. Griffin told fans they’d be getting married after midnight and it would be “very atypical, very fun.”

“You’re going to die when you see the officiant,” the comedian said in the video. Shortly after that video was posted, Griffin shared video of the nuptials.

“We are gathered here today to celebrate the marriage of Randy Bick and Kathy Griffin,” Tomlin said. “What was supposed to be a shallow, tooted and booted, one-night-stand, has grown and flourished to something far more meaningful. They stayed together, then they couldn’t stay away from one another.”

Griffin only posted a short clip of the wedding but said the whole thing lasted about 14 minutes. She also shared a photo of herself and Bick on their first date, in 2011.

“We are in the back of a limo provided by the one only @GloriaEstefan because her team arranged for me to surprise her as a back up ‘dancer’ when she performed at the Alma awards!” Griffin shared.

She also let fans in on a detail about her wedding dress, which is seen in that photo.

“I asked Randy to pick out which ever one of my long dresses was his favorite for any reason. He picked out this dress and showed me this photo. Romance is hotttt again,” she tweeted.

Griffin starred in the show, “Kathy Griffin: My Life on the D-List” until 2010. In 2017, her career took a hit after she shared a controversial photo of herself holding a mask of President Donald Trump dripping with what appeared to be fake blood. This year, she made a comeback with a new documentary, “Kathy Griffin: A Hell of a Story.”

Griffin and Tomlin seem to have been friends for a while. In 2016 Tomlin and her wife, Jane Wagner, promoted Griffin’s book on their Facebook page. And in 2009, an episode of Griffin’s reality show was titled “I Heart Lily Tomlin.”