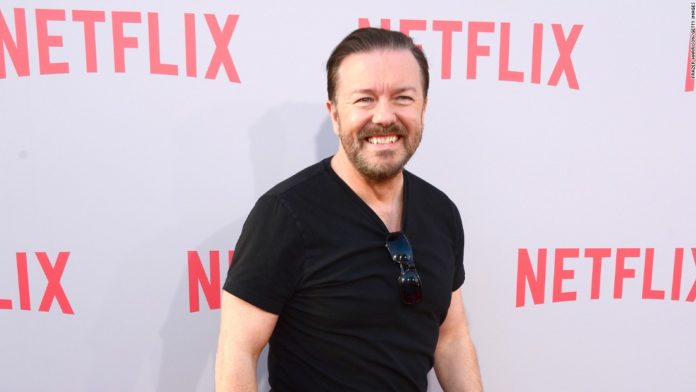 Returning as host for the awards show for a fifth time on Sunday, the comedian has a very specific formula for who and what he targets, and says he works on his material from the second he takes the job until he takes the stage.
“I start writing immediately. Before I decide to do it, I have to go, ‘Have I got anything? What’s happened? I write jokes and they’re considered and I make sure they’re bulletproof,” Gervais tells The Hollywood Reporter. “Nowadays, you’ve got to make sure they’re bulletproof in 10 years’ time, with people going through saying, ‘He said this once, 10 years [ago].’ Kevin Hart [lost] his job [as Oscars host] for 10-year-old tweets that he said he was sorry about and deleted at the time. So there’s more pressure on making [the jokes bulletproof]. It’s the world [watching]. This isn’t me in a comedy club.”
Despite past criticism that some of his jokes as host of the Globes went over the line, Gervais says he’s particular about not being mean, sometimes people just don’t get the joke.
“People like the idea of freedom of speech until they hear something they don’t like,” he tells THR. “So there’s still a pressure, but that doesn’t mean I’m going to water it down or back down and not say what I want. It’s just another form of what we’ve been through many, many times — it used to be called P.C. I think those things start off with very good intention and then they’re mugged. It’s a good thing to not be racist and sexist and homophobic. But it’s not a good thing to not be allowed to make jokes about those things, because you can tell a joke about race without being racist. I’m happy to play by the rules. It’s just that the 200 million people watching have different rules. That’s the plight. When people say, ‘He crossed the line,’ I say, ‘I didn’t draw a line, you did.’ It’s relative. It’s subjective.”
As for his targets, he says he aims to poke fun at the industry of entertainment and bad behavior, not about things people can’t help, like “the color of their skin, their sex or where they were born.”
“They mustn’t be the targets,” Gervais explains. “You mustn’t make those things the target to be ridiculed. You shouldn’t laugh at something they can’t help. Yeah, I think that’s a pretty good rule. Again, it’s not a rule of comedy. It’s my personal rule. Deep down, I want people to know I’m not a racist or a homophobe or a sexist.”
He continued: “But I’m all for forgiveness as well, so if someone gets drunk and says something awful, I can tease them, but I don’t want them imprisoned. Bad behavior’s not always a terrible, criminal, punishable offense. Sometimes it’s like, ‘You’ve embarrassed yourself, mate.'”
The “Office” star says he never had expectations going into the show, and actually recognizes the hosting job as “a bad gig for a comedian.”
“I couldn’t believe I was asked. They had never had a presenter. I thought, ‘Oh, this is great.’ I didn’t know what it was like. I had no expectations. I’d won a couple of Golden Globes, so I had been and it was a nice party,” he says, adding, “If that was a comedy club, you’d go, ‘I’m not playing that club.'”
In the end, he says, he keeps taking the gig because it’s fun. It’s certainly not for the money, which he has plenty of, mostly from creating and starring in “The Office.” But there will not be a spinoff, he says.
“No, it’s sort of done,” Gervais says. “I’ve got too many ideas to be bogged down with one.”