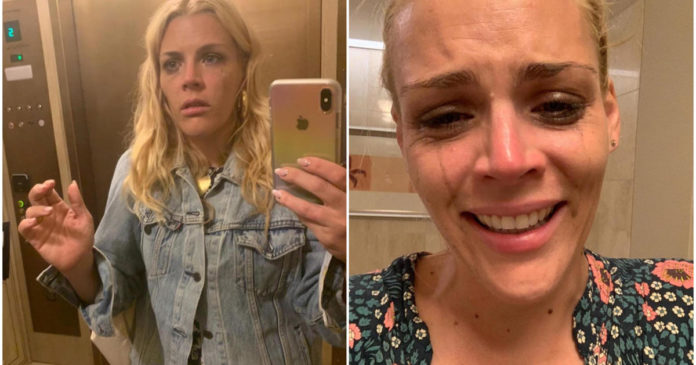 Busy Philipps closed out 2019 and rang in 2020 by sharing what she called “almostgrams” – photos she almost posted on Instagram last year “but then thought better of it.” In doing so, the actress revealed she was “blindsided” by the cancellation of her E! talk show, sharing photos of herself crying when she found out and screenshots of texts messages with an E! executive.

Phillips said that on April 5, she had gotten off a flight when her manager asked her to call. When she did, Philipps found out her new talk show “Busy Tonight” was not renewed. “I was blindsided, especially since the last text I had from the head of E(who’s now gone?‍♀️) was about marketing for busy tonight that he was excited to tell me about,” she said in the post.

The actress said she proceeded to sit in the lobby of her Dallas hotel and drink tequila and cry, making various phone calls. “I waited for a call or email from someone at E, which never came so I sent a text to the head of the network that truly makes me lol to this day(slide 3),” Philipps wrote.

The post also included photos showing information about the New Moon that occurred that night, texts from her husband, Marc Silverstein, about her favorite Deerhunter song, and a tattoo she says she got that day, which reads “f*** em.”

The 40-year-old actress also shared a photo of a letter that her daughter, Birdie, wrote to E! ahead of the final episode of “Busy Tonight.”

“You are the worst TV network EVER,” the 11-year-old wrote.

“Well anyways my mom does work much harder than you so you don’t diserve her,” the letter continues.

Philipps ended her Instagram post explaining why she shared these things: “I feel like as this year is almost over, the decade is closing, it’s the right time to post the letter… And all the rest of it from April 5. Because here’s the thing. The moon was right, the song WAS a good sign, my girl knows something about her mom – I work hard AF and love to prove people wrong and finally, the men will always try to f*** you over so f*** em and figure out something else.”

She then said she has figured something else out and will be able to share more about it in 2020. The long post received praise from many famous friends, including Jonathan Van Ness, who commended Birdie’s letter.

After the cancellation of “Busy Tonight” on E!, Philipps announced she was trying to find a new home for the show elsewhere, according to Entertainment Tonight.

CBS News has reached out to E! and the network declined to comment.