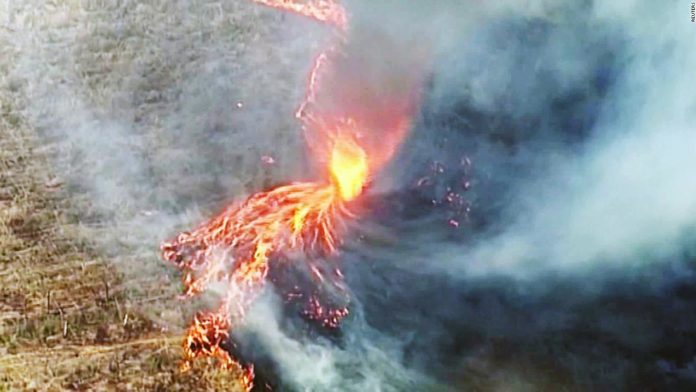 The firenados, triggered by explosive pyrocumulonimbus clouds reaching up to 16 kilometers (10 miles) high, are making conditions even more dangerous and unpredictable than usual.
One firefighter died when his truck was overturned in a fire tornado earlier this week.
Pyrocumulonimbus clouds form when the intense heat from a blaze forces air to rise rapidly as smoke billows in a massive, anvil-shaped tower.
These fierce clouds — called flammagenitus — produce erratic dynamics and bring quick, unpredictable changes, making the work of firefighters ever more dangerous, Bureau of Meteorology spokesman Neil Bennett told Australia’s ABC.
The clouds can also produce “dry lightning,” or lightning without rain.
“The prediction of fire weather in terms of wind is critical and when you’ve got a highly variable wind environment as you do with a thunderstorm, if you have that in the fire environment, those winds become very, very difficult to predict,” Bennett said.
On Monday, New South Wales Rural Fire Service Commissioner Shane Fitzsimmons announced the loss of a volunteer member whose 12-ton fire truck was flipped by what he described as a “pyro-convective line” of “cyclonic type winds.”
“The local crews that were able to catch up with him in the field at the accident scene describe what they experienced as truly horrific. They described it as an extraordinary wind event, describing it as a fire tornado,” Fitzsimmons said, visibly distraught.
“We have a completely devastated family, a devastated local community at what just has been an extraordinary loss.”