Home Sport How did Rooney do on his Derby debut? 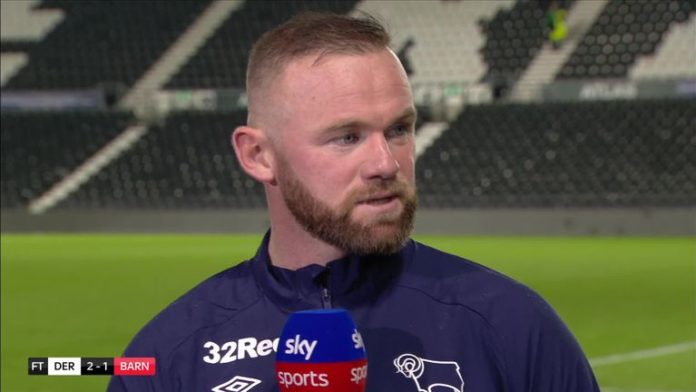 Wayne Rooney created the first goal and played a big part in the winner as Derby beat Barnsley 2-1 in his debut on Thursday night.

It may not have been a vintage Wayne Rooney performance from years gone by, but the England and Manchester United legend showed over 90 minutes what a major asset he will be to Derby both on and away from the pitch.

Phillip Cocu would not confirm whether Rooney would start or not before his debut, but in the end there was no messing about from the Derby boss as he handed his new signing the captaincy and a place in midfield right away.

Any suggestion Rooney may not be up for the hustle and bustle of the Championship was quickly quelled. He started in the heart of midfield and within seven minutes he had won four tackles and a header.

It had been more than two months since Rooney last took to the field for DC United, so naturally a few early cobwebs started to emerge for the 34-year-old, and in truth there were several times where he did not seem quite up to the pace of things.

“My general fitness felt good,” he told Sky Sports after the game. “I trained for a long time to prepare for this game and the important thing was the victory, which we were in desperate need of.

“I’ve had a lot of hard training sessions, and it’s frustrating to do them as a player [and not play] but they’ve helped me through tonight.”

The legs may not quite be what they were, but one thing that will never leave him is the quality of his delivery. On two occasions in the first half he played pin-point free-kicks into the box that found the head of Curtis Davies, but his team-mate could not do enough with them on either occasion.

Then came the big moment on the stroke of half-time. It was a fantastic in-swinging ball to bamboozle the Barnsley defence and find Jack Marriott, who latched onto it to turn it home.

“The years go by but the genius never really dims,” said Andy Hinchcliffe in the commentary box. “It was inch perfect.”

Rooney later added: “I always found as a forward player that if you get the ball within the width of the goal that anything can happen, and I just tried to do that.”

The second half was quieter as he moved into a slightly more advanced position. On 52 minutes there was a chance to score and level the game after Elliot Simoes had made it 1-1 for Barnsley, as he made a rare surge into the six-yard box. But he mistimed a header from Jason Knight’s nod across the box, with the ball hitting his shoulder and went wide.

But he played a key part in the winner. Spreading it wide for Andre Wisdom, who crossed for Martyn Waghorn to turn the ball in.

“It was a mature performance,” Rooney’s former Manchester United team-mate Darren Fletcher told Sky Sports. “He played for the team again. I don’t think the formation suited him because we saw the moments of quality he had when he was pinging the ball around the park. That’s his strength when he plays in midfield and he didn’t have those outlets.

“But he was involved in both goals, he worked hard for the team, he didn’t give the ball away, he showed his maturity. Surrounded by young midfielders, he was like a player-coach and has seen Derby to a fantastic victory. For how long it’s been since he’s not played, being his first game and in the conditions, I think he performed fantastically.

“The last five minutes he was feeling it a little bit but he’s got experience, he knows what he’s doing. I think he’ll be very happy with his performance tonight and, most importantly, he’ll be happy that Derby won.

“He’s on the pitch. You can see the influence he has on people around him – they are inspired by Wayne Rooney.”

Fletcher wasn’t wrong about him performing as a player-coach on the pitch. That is Rooney’s role at the club and he was joined in midfield by 18-year-old Jason Knight and 19-year-old Max Bird – teenagers who have grown up watching him play for England at World Cups and win trophy after trophy with Manchester United.

“It was so surreal,” Bird – who won Man of the Match – told Sky Sports after the game. “I’m a Man Utd fan as well so playing alongside one of my heroes was a dream come true.”

An obvious moment of frustration for Rooney was the way Marriott missed a chance when clean through in the first half. And from that incident you could see the value Derby will gain from having such experience on the pitch. The players around him will raise their game as they will be desperate not to let him down.

“It was not how he missed, it was the way,” said Rooney. “He was casual and lazy with it. I said it to him at half-time and he said he thought he was offside, and I think you have to learn from that. Go through and put the ball in the back of the net if you’re offside, because if you’re not you score the goal. Hopefully he won’t be doing that again.”

It seems that Rooney the player-coach has arrived.