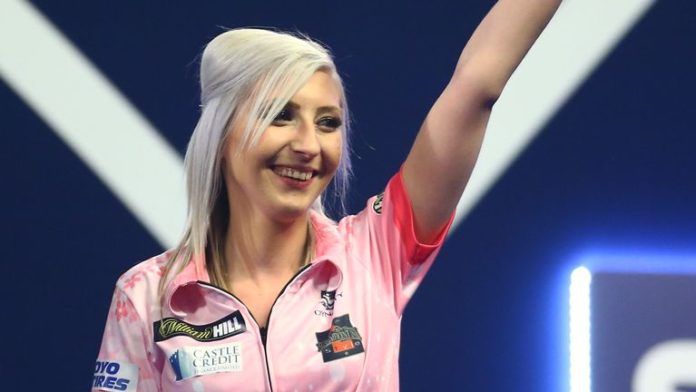 Fallon Sherrock has already made history by becoming the first woman to win a match at the World Darts Championship, but she believes it is possible for her to win the whole tournament in the future.

Sherrock was the star of the 2020 World Championships, and is still striving for greatness after her Alexandra Palace success.

She reached the third round this year, beating 11th seed Mensur Suljovic on the way, but insists she can go further in the competition in the future.

“The possibilities are endless. I’m hoping in the next 12 months people will see my better game.

“I can improve on what I’ve done and hopefully playing the better players on these stages will help me achieve that.

“Then hopefully if I can get back to Ally Pally next year and beat a couple more people – that for me would be my achievement of the year at the moment.”

Sherrock was rewarded for her sensational run with a spot as a ‘challenger’ in this year’s Premier League.

The newly-crowned ‘Queen of the Palace’ will feature on Night Two in Nottingham, where she will play one of the top nine men’s players in the world.

She has also been handed a place at the six invitational World Series events across the globe in 2020, and admits she cannot wait for an exciting season.

Sherrock added: “I’m so excited for the year ahead. I get to go on to big stages with all these top men now and do something that I can only dream of.

“Playing these men and travelling the world doing something I love to do – play darts – that’s incredible. I can only dream of that and now it’s happening.

“I’m really looking forward to going to the World Series in New York. I’ve never been there, so I’m just so excited to see all the people over there and how they’re going to greet me and my fan base, and obviously seeing some of the sights as well.”

Stay up to date with reports, interviews, features & reports at skysports.com/darts, our app for mobile devices and @SkySportsDarts.