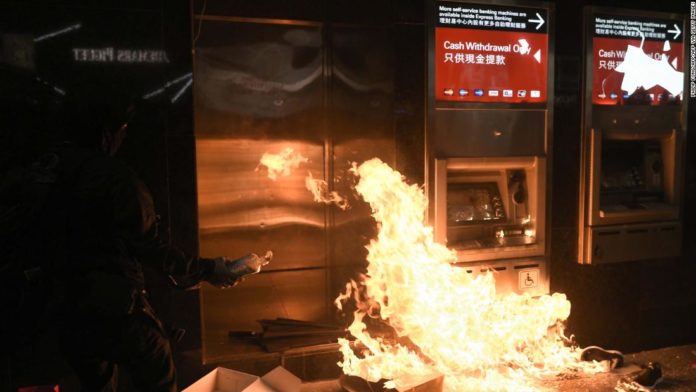 Protesters in the former British colony attacked some branches of HSBC (HBCYF) this week and daubed red paint on a pair of bronze lions outside the bank’s Hong Kong headquarters. HSBC, the largest bank in the city, has been accused of working with Chinese authorities to cut off funding for the protesters.
HSBC has denied those allegations and condemned what it described as repeated “acts of vandalism” against its branches. It said in a statement on Thursday that it was working to restore ATM and other banking services that had been suspended as a result of the attacks.
Meanwhile, the London Stock Exchange (LDNXF) is at risk of losing Chinese business because of Beijing’s anger at Britain’s stance on the protests in Hong Kong. Citing multiple sources, Reuters reported that a partnership between the London and Shanghai stock exchanges was being suspended because of political tension.
Neither the exchanges, nor Chinese financial regulators, responded to requests for comment. The Financial Conduct Authority, which regulates UK financial markets, declined to comment.
Rising tension with Beijing comes as Britain looks to build stronger commercial ties with countries such as China and the United States as it prepares to leave the European Union. Brexit will take place at the end of this month but a huge cloud of uncertainty still hangs over the future of trade between Britain and its biggest export market. Financial services are central to the UK economy, accounting for 13% of all exports and providing over 1 million jobs.
The link between the London and Shanghai exchanges was first announced in 2015. It allows UK-listed companies to sell shares in China and permits Chinese companies to raise money on the UK market, giving them access to a bigger pool of international investors.
Until late December, HSBC had largely escaped the vandalism directed against some Chinese bank branches during the Hong Kong protests, such as those owned by the Bank of China (BACHF).
But Britain’s biggest bank has been targeted in recent weeks after it closed an account in November held by the Spark Alliance, a nonprofit group in Hong Kong raising funds for the protests.
Protesters accused the bank of helping the police with an investigation into suspected money laundering, which led to the arrest of some Spark Alliance members on December 19.
HSBC said that the closure of the account was “completely unrelated” to the arrests or the situation in Hong Kong, and was carried out in keeping with global regulations that require banks to conduct regular “due diligence” reviews on customer accounts.
“As the account has not been used for its stated purpose, we closed the account in November 2019 following fund transfer instruction from the customer,” it said in a statement on December 25.
HSBC, which was established in Hong Kong in 1865, derived half of its pretax profits from business in Asia’s premier financial hub in the first nine months of last year.
— Charles Riley, Yong Xiong, and Steven Jiang contributed to the report.