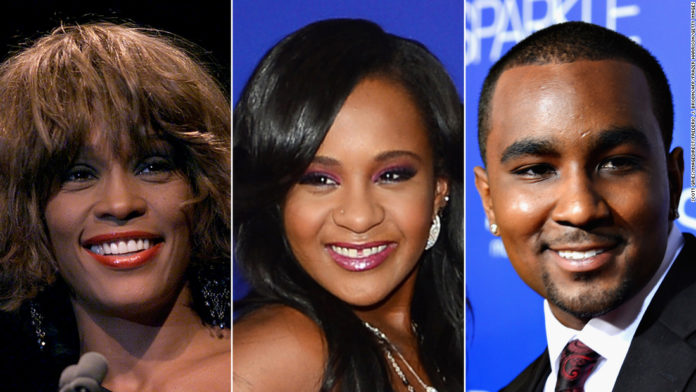 In the scene, the pair are shown being affectionate as Brown’s aunt, Pat Houston, discusses their involvement.
“Nick and Krissy are inseparable,” Pat Houston says. “They feel like it’s them against the world. And that’s not what I want for her.”
For many who watched Bobbi Kristina grow up as the daughter of troubled singers Whitney Houston and Bobby Brown, it wasn’t what they wanted for her either.
Gordon’s death on Tuesday at the age of 30 brings to a conclusion one of Hollywood’s most drama-filled tales, which saw not only the loss of one of music’s biggest stars, but also cast that star’s daughter as an heir to the demons that plagued both her parents.
And at the center of the tragedy stood Gordon, who was viewed by many as a man who did more harm than good.

Whitney Houston considered Gordon her godson and took him both under her wing as well as into her household when he was a teen.
During a 2016 interview on the “Dr. Phil” show, Gordon explained how he came to live alongside the singer’s then 14-year-old daughter.
“I gave my mom a couple of problems,” Gordon said. “I didn’t agree with my stepdad on some things.”
Gordon said Houston and her daughter were “lonely” and “hurting” in the wake of the star’s split with her then-husband, singer Bobby Brown.
“They were really hurt,” Gordon told Dr. Phil McGraw. “They talked about it all the time. It’s something that really affected them in a negative way. Especially Krissy.”
Houston and Brown had a tumultuous 15-year marriage marked by allegations of infidelity, drug abuse and legal problems.

Gordon became the man of the house and was there to support 18-year-old Bobbi Kristina after her mother was found dead in a bathtub at the upscale Beverly Hills Hotel hours before she was to attend a pre-Grammy awards bash hosted by her mentor, Clive Davis.
The Los Angeles County coroner later ruled Houston’s death as an accidental drowning with the “effects of atherosclerotic heart disease and cocaine use” as contributing factors.
Houston and her daughter were incredibly close and there was much concern about how Brown would deal with losing her mother, especially after the teen was briefly hospitalized in the midst of her grief.
That worry was heightened after she and Gordon went public with their romance in the months following her mother’s death. Many viewed the couple as having a brother-sister type of relationship.
Brown’s appearance on the family’s 2012-13 reality show “The Houstons: On Our Own” also raised red flags, as she sometimes appeared to be slurring her words.
In one episode, her aunt Pat Houston worried that the underage Brown might have been drinking and noted that Houston would occasionally allow her teen daughter to have a glass of wine or champagne.
Also troubling to her family was Brown’s growing reliance on Gordon, who she called her husband and “partner in crime.”
The pair announced their engagement in July 2013 and she often used her official Twitter account to express her love for Gordon.
At one point, Brown posted a message on her Facebook page responding to critics of their relationship.
“I’m tired of hearing people say, ‘Eww you’re engaged to your brother or if Whitney was still alive would we be together or would she approve of this.’ Let me clear up something. We aren’t even real brother and sister, nor is he my adoptive brother,” she wrote at the time.
In 2014 Brown tweeted that she and Gordon had married, but the couple were never legally wed.

On January 31, 2015 Brown was found unresponsive and not breathing in the bathtub at her Roswell, Georgia, home — nearly three years to the day after her mother accidentally drowned.
Gordon later told Dr. Phil he was confused as to why Bobbi Kristina would be in the bathtub because they both feared the tub following Houston’s death.
He also claimed his girlfriend drank too much and passed out in the tub the night before Houston drowned.
“Whitney actually found her in there,” Gordon said of Brown allegedly passing out in the tub.
Following her near-drowning, Brown was treated in a hospital and then a hospice facility. She died six months later at the age of 22.
An autopsy declared that drug intoxication and immersion in water were the cause of the pneumonia and brain damage that ultimately led to Brown’s death.
Attention immediately turned to Gordon after Brown was discovered unresponsive and her father, singer Bobby Brown, was outspoken in his belief that her daughter’s boyfriend was somehow responsible.
No criminal charges were ever filed against Gordon,but he was found legally responsible for Brown’s death in a civil case and in 2016 was ordered to pay $36 million to the estate of his late girlfriend.
Gordon failed to appear for two hearings in the civil case in Brown’s death, and her family won by default.

‘It got really bad’

Soon after Brown’s near-drowning, Gordon had an emotional appearance on the “Dr. Phil” show where he threatened suicide and was convinced to enter rehab.
“My pain is horrible,” Gordon said as he sat beside his mother during the interview and talked of his fear of losing Brown, who was in a coma at the time.
In a subsequent appearance, Gordon told Dr. Phil McGraw he was grateful to have gone to rehab after self-medicating with drugs and alcohol.
He also said he and Brown had done drugs together.
“It got really bad after (Houston) had passed away,” Gordon said. “It was unfortunate, but at the time that was kind of the only way we knew how to deal with what had happened.”
In a 2017 interview with the Daily Mail, Gordon talked about being blamed for Brown’s death and proclaimed his innocence.
“You know if there was something concrete I think I’d be in cuffs,” he said.
“You know what I was? I was a prince and then I became a pawn, somebody just to point the finger at,” Gordon said. “Now I won’t stand for it as long as I can fight it.”

CNN’s Faith Karimi and Jamiel Lynch contributed to this report