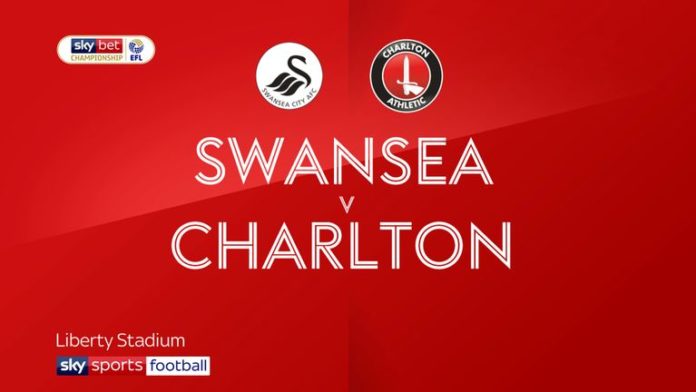 Charlton began their new era under the ownership of East Street Investments with a 1-0 defeat at Swansea.

Yan Dhanda’s first-half strike was enough to propel the Swans into the play-off places and seal a first win in three.

The injury-ravaged Addicks are now just five points clear of the bottom three after their miserable run of just one win in 14 matches continued.

Charlton kicked off a new chapter under the ownership of East Street Investments after their takeover from former owner Roland Duchatelet was confirmed by the EFL four hours before the Liberty Stadium clash.

And there were new beginnings on the pitch for 20-year-olds Ben Dempsey and Josh Davison were handed their full league debuts.

The academy graduates were two of five changes from the side that played Derby on Monday as Adam Matthews, Jason Pearce and Lyle Taylor returned to the starting line-up.

Steve Cooper also made sweeping changes to the Swansea side held by Barnsley in their final match of 2019.

The return of centre-back Mike Van Der Hoorn from a knee injury was one of six alterations that also saw Connor Roberts, George Byers, Dhanda, Wayne Routledge and Borja Baston come into the starting XI.

The optimism from the travelling Charlton fans disappeared in the 14th minute when Dhanda fired in the opener.

The Liverpool academy product started a clinical attacking move with a sweeping ball out to Roberts, who charged down the right before playing it inside to Byers.

Andre Ayew and Routledge exchanged passes during a neat build-up before Dhanda curled the ball into the bottom corner from the edge of box.

Borja hit the side netting with a volley moments later before firing high and wide with only the goalkeeper to beat from eight yards out after Byers robbed Charlton of possession deep in their own half.

Swansea were in complete control but were denied a second goal by some heroic goalkeeping and the woodwork.

Ayew was denied by a sprawling save from Dillon Phillips after stabbing Routledge’s pin-point cross towards the bottom corner.

The ball fell at the feet of Roberts, who cut it back for Byers to lash a low shot against the upright as Swansea went in just a single goal in front.

Cooper’s men were given a warning seven minutes into the second half when substitute Alfie Doughty latched onto Albie Morgan’s lofted ball in behind, but the young forward dragged his shot wide.

Charlton piled on the pressure in the closing stages as they went in search of a morale-boosting leveller but Swansea held on to climb into the top six.

Swansea’s Steve Cooper: “It’s good to be back to winning ways and get three points. I thought in the first half we were excellent. I felt we were as good as we have been here this season. We were good for the 1-0 lead, but the frustration was that it was not two or three.

“We looked a real threat today, I am certainly pleased with some of the football we played. The second half was not a surprise, we’ve had so many games over the festive period. A lot of lads have played a lot of games recently, even though we made changes.”

Charlton’s Lee Bowyer: “I’m over the moon, everyone is happy, I’m happy, the fans are happy [with the takeover]. The most important thing is that the club is moving forward. We have a group of people who want to do good things for the football club.

“It can only mean good things for the football club but it won’t happen overnight. We need to build up to be an established Championship side.

“I’m proud, I asked the young players to go out and grab their opportunity. I knew the youngsters would give me everything they got and they didn’t disappoint. They were a credit to the football club, to keep going on two days rest is tough, but they keep going and I can’t fault them.”