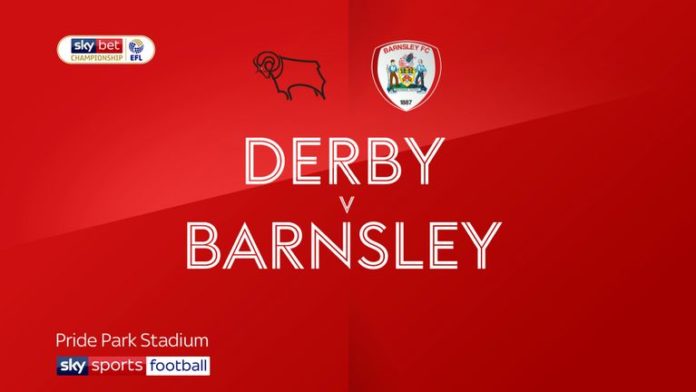 Wayne Rooney laid on an assist during his long-awaited Derby debut as the Rams beat ever-improving Barnsley 2-1 at Pride Park on Thursday evening.

Jack Marriott scored the opener on the stroke of half-time when he turned in a free kick from England’s record goalscorer (45), but Elliot Simoes levelled the game after the restart after Ben Hamer’s glaring mistake (50).

A close-range finish from Martyn Waghorn restored the lead for the hosts (57) and, eventually, secured back-to-back victories for the first time since April 2019.

In spite of the result, there is no movement for either side in the Sky Bet Championship standings; Derby stay 17th on 33 points, with Barnsley still languishing in 23rd, three points from safety.

How Rooney’s return to English football ended in victory

With just under five months having passed since Rooney’s signing was announced, the hype surrounding his return to English football was palpable ahead of Derby’s first game of the decade.

A period of adaptation is to be expected and so life in the Sky Bet Championship began quietly for England’s all-time record goalscorer. But his contribution was overshadowed by three chances spurned by Marriott, the last of which saw him dink harmlessly past the left-hand post when other options seemed more attractive.

Then a moment of redemption for the pair. Rooney swept a teasing free kick from 35 yards into the six-yard box, where Marriott was waiting to prod past Sami Radlinger to end a run of 16 league games without a goal.

Five minutes after the restart the Rams found themselves back at square one. Just moments after Radlinger had superbly pushed Matt Clarke’s header onto the post, his opposite number spilled Conor Chaplin’s shot, allowing Simoes to nip in and poke home.

Derby boss Phillip Cocu handed Wayne Rooney his Derby debut in place of Krystian Bielik, who was sent off in the 2-1 victory over Charlton.

Meanwhile, Tykes boss Gerhard Struber made two changes to the side that drew 0-0 with Swansea last time out, with Jacob Brown and Cauley Woodrow making way for Patrick Schmidt and Mike-Steven Bahre.

A busy start to the second half continued when Waghorn netted his eighth of the season after a plum cross from Andre Wisdom, yet Phillip Cocu’s men appeared to be resting on their laurels as the second period wore on.

Cries of frustration echoed around Pride Park in the closing stages of the game as Derby sat deep so as to preserve their slender lead, but though Barnsley rallied until the final whistle, an equaliser would not follow.

Man of the match – Max Bird

“It was so surreal,” said Manchester United fan Bird after playing 90 minutes with “one of my heroes”. The 19-year-old midfielder didn’t let the occasion get to his head at Pride Park and showed maturity beyond his years in just his fifth first-chteam appearance of the season.

Derby’s Phillip Cocu: “I think the first half we started excellent, played very good and we had great opportunities to score. In the end a wide free-kick gave us the lead, but [we had] three 100 per cent chances on goal and you have to score so you make it easier for yourself.

“Wayne Rooney was important today. He showed with his deliveries and his magnificent cross pass leading into the second goal. Happy to see he did well and kept on playing until the end.”

Barnsley’s Gerhard Struber: “It was not enough for a point or for a victory. I think the energy from the opponent with Rooney in the first 30 minutes caused us a lot of problems. We spent a lot of half-time speaking about our positioning. Not enough today.

“Our situation is difficult. We need points to come up from the relegation zone. I think we can pick up points but we need the big concentration, the big focus from the first until the last second and today, we don’t have the big focus and this is the problem when we play against a great opponent.”

Rooney’s former Manchester United team-mate Darren Fletcher was a guest on Sky Sports’ EFL coverage at Pride Park and he discussed the influence the 34-year-old will have during his spell with the club.

He said: “The last five minutes he was feeling it a little bit but he’s got experience, he knows what he’s doing. I think he’ll be very happy with his performance tonight and, most importantly, he’ll be happy that Derby won.

“You can see the influence he has on people around him – they are inspired by Wayne Rooney. The young lad there, man of the match, says it: Playing beside Wayne Rooney inspires his performance. And he helped Wayne Rooney just as much as Wayne Rooney helped him.

“It’s fantastic to see and I’m excited for Derby. If they can do something in January, who knows?”

The FA Cup takes centre stage later this week, with both of these sides in action on Sunday, January 5. Derby face Crystal Palace at Selhurst Park, while Barnsley travel to Alexandra Stadium to take on Crewe. Both fixtures get underway at 2.01pm.