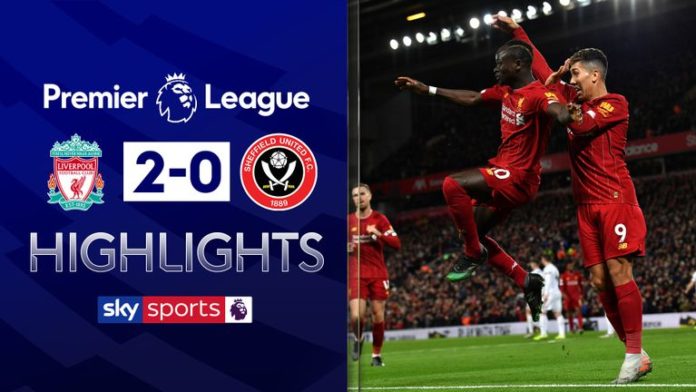 Liverpool restored their 13-point lead at the top of the Premier League with a 2-0 victory over Sheffield United that guarantees Jurgen Klopp’s side an unbeaten calendar year in the top flight.

The runaway leaders last lost a league game at champions Manchester City on January 3, 2019, but Sheffield United’s hopes of ending that run were extinguished by goals in either half by Mohamed Salah and Sadio Mane.

An imperious performance secured Liverpool’s 19th victory of the season and stretched their unbeaten run in the Premier League to 37 games – 12 short of Arsenal’s 49-game record – as the Reds marched on towards a first league title in 30 years.

The Blades, meanwhile, remain eighth in the table, seven points adrift from the top four after slipping to back-to-back league defeats for the first time since the opening two games of last season’s Championship.

Man of the Match: Sadio Mane

Liverpool were forced into a late change after Naby Keita injured himself in the warm-up, but it was going to take more than that to derail the Reds. James Milner slotted straight into the starting line-up and, within four minutes of kick-off, the hosts had the lead.

An unfortunate slip from full-back George Baldock allowed Virgil van Dijk’s searching diagonal to reach Andrew Robertson in behind the advanced Sheffield United defence, and the Scot crossed for the unmarked Salah to slot his 13th goal of the season.

Sheffield United’s game plan may have gone out of the window no sooner after the game had started, but Chris Wilder’s side rallied and could have been level within four minutes of that setback as John Lundstram’s volley flashed wide before David McGoldrick stung Alisson Becker’s palms with a rasping volley.

But from there on it was all Liverpool, who were denied a spectacular second on 11 minutes when Salah’s fierce drive was tipped over the bar by goalkeeper Dean Henderson.

Henderson, whose goalkeeping howler gifted Liverpool victory in September’s reverse fixture, was on a one-man crusade to prevent the Reds from stretching further clear before the break as Salah’s drive on the half hour was punched clear.

You have to go back to December 2009 for the last time Liverpool lost a home league game after leading at half-time, and the Reds were in no mood to buck a trend that had spanned three decades as their dominance continued after the break.

Liverpool should have had a third within two minutes of the restart but Robertson’s inviting delivery into the box somehow evaded Van Dijk and Mane.

Liverpool went even closer on the hour as time stood still in the Sheffield United area. Salah’s in-swinging cross cannoned against the post, rolled agonisingly across the goal line and into the arms of a relieved Henderson, who gathered before further damage could be inflicted.

But, four minutes later, the Blades’ defences were breached for a second time. Alisson launched Liverpool away on a devastating counter which ended with Mane playing a one-two with Salah to get through on goal where he rifled a rebound into the roof of the net after Henderson had saved his initial effort.

Henderson denied Salah a second with a smothering save on 69 minutes before a gilt-edged miss from Oli McBurnie summed up a frustrating outing for Sheffield United at the end of the gruelling festive schedule.

58 – Liverpool have accumulated 58 points from their 20 Premier League games this season; in English top-flight history, only Manchester City in 2017-18 (also 58) have had as many points at this stage of a campaign (assuming three points for a win all-time). Rolling. pic.twitter.com/NiTiYK4q5r

Anaylsis: Could Liverpool match the Invincibles?

‘Klopp has repeatedly ruled out the possibility of replicating Arsenal’s Invincibles but the comparisons are inevitable when Liverpool continue to produce performances and results of such a relentlessly high level.

‘The Reds are actually averaging more points per game than the Invincibles. They are scoring more goals and conceding fewer. So could they go on and match them?’

Liverpool manager Jurgen Klopp: “We played in the exact way you have to play against Sheffield United. I don’t think there were a lot of game like this against Sheffield United in the last year. That was the best thing the boys did, they didn’t let them get anything out of the game, which is really difficult. It’s an intense period of the year but in terms of an overall performance it was as good as anything, really, really good. That makes me happy.”

Sheffield United boss Chris Wilder: “You just look at the appetite and the desire of everybody around the football club, it’s got a feeling of a relentlessness about them and the supporters as well, the way they drive their players on. They realise what a huge, important season it is and a fantastic position they’re in. It’d be a very brave man to bet against them being the champions of this division.”

Man of the Match – Sadio Mane

25 – Sadio Mané has scored 25 Premier League goals at Anfield since the start of last season – across the top five European leagues, the only two players with more at a specific venue are Lionel Messi (29 at the Camp Nou) and Kylian Mbappé (27 at the Parc des Princes). Guardian. pic.twitter.com/VN89M6DCpd

Sadio Mane’s goal was his 100th goal involvement for Liverpool in his 151st appearance in all competitions for the club (74 goals, 26 assists). Mane has scored 25 Premier League goals at Anfield since the start of last season.

The third round of the FA Cup sees Liverpool host Merseyside rivals Everton on Sunday at 4.01pm, while Sheffield United host non-league Fylde earlier that day at 2.01pm.