Home Sport Zlatan unveiled: ‘I had more offers at 38 than 28’ 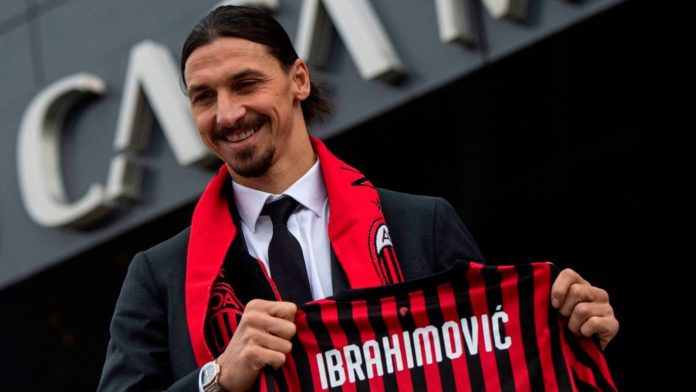 Ibrahimovic: “It’s impossible to play like I did 10 years ago, but I know what I need to do: instead of running, I shoot from 40 metres!”

Zlatan Ibrahimovic claims he had more offers at the age of 38 than 28 – despite being told it would be “impossible” to come back after a serious injury at Manchester United.

Ibrahimovic has rejoined AC Milan, the club he left seven years ago, on a six-month deal with an option to extend his stay by a further year.

He has been a free agent since leaving Los Angeles Galaxy in November, telling fans to “go back to watching baseball”.

“At 38, I had more requests than at 28,” he said. “I was looking for the adrenaline inside of me, to ensure I get the best out of myself.”

157 – Zlatan Ibrahimovic scored 157 goals in Europe’s top five leagues this decade after his 30th birthday, 20 more than any other while in this age group (Cristiano Ronaldo, 137). Immortal. #Opta2010s pic.twitter.com/RqWHKW3Yll

Ibrahimovic insists he will not stay at Milan beyond the end of the season “just to be here” if he can no longer cut it in Serie A.

His last spell in European football was at Manchester United, where he scored 28 goals in his first season before a serious knee injury disrupted his second and he left for Galaxy in March 2018.

“Many told me it would be impossible to come back [from the injury],” he said. “I worked hard and to the point I can still play now.

Ibra: I’m meaner than before

Ibrahimovic has not played since October but could make his debut for Milan against Sampdoria at the San Siro on Monday.

The seven-time European champions have endured a difficult campaign so far, 11th in the table and still reeling from a 5-0 loss to Atalanta – the club’s biggest Serie A defeat in more than two decades.

The last time I left AC Milan, it was without my say-so. The important thing is that I am here now.

He promised he would not go easy on his younger colleagues.

“I’m meaner than before,” he said. “They know what I am like, how I train and play each match.

“You have to work hard. You have to know how to suffer, otherwise you don’t reach your maximum potential. Not everyone likes to suffer but I do… and I expect a lot from my team-mates.”